Alright, with this patch and trim job on the right arm, I am finished. Well, mostly. I need to touch up my maidens on the back, but all patches are attached with only those two needing some extra work now. If I could go out in public, I could wear this in public, but that's in bad form nowadays around here. Here is the right arm: 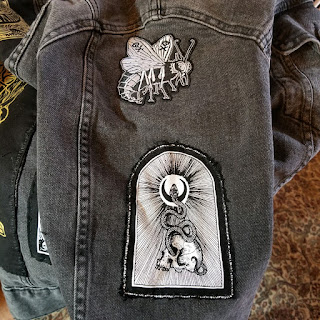 The edges of the skull/snake/moon emblem are ragged because I had to cut against the grain to trim the patch down to where I wanted it. I'm hoping that what I call the "whip stitch" (which probably means something entirely different to people who actually know what they're talking about) will provide some protection from fraying. It's pretty tight. I sewed parallel to the border, first, all the way around (twice on some stretches), then went over the initial stitches from the inside of the border to the outside, all the way around (twice on most of the edges).

As for the overall product, here are some shots: 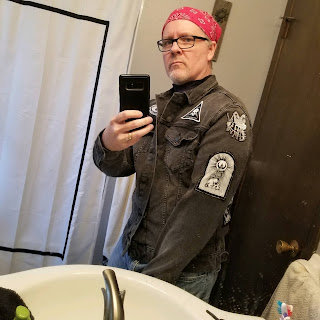 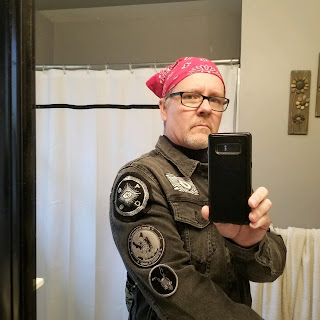 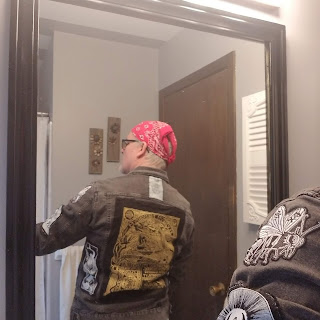 Awkward back shot that I had to do gymnastics to get. Note absence of toilet in any background. I hate when people do these and catch their john behind them. Gross! 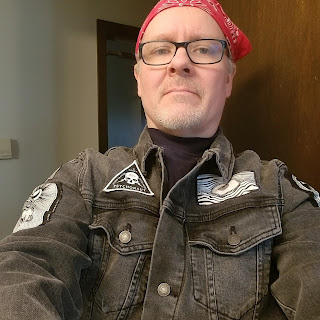 Selfie from the front. This is how you might encounter me once the apocalypse is over. 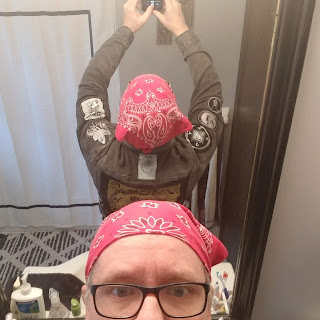 My favorite shot of all - me watching me watching . . . you get the idea . . . looking like I'm praising the moon and stars when in reality I'm only trying to figure out how to make this shot work. Still, I love this photo. Humor me.

And there you have it. A little later than I had hoped, ultimately, but I am rather pleased with the results and am VERY glad I took a month off of social media to get this thing started (after reading an inspiring book). I am planning on getting rid of some of these rivets in the future and replacing them with skull buttons or something because I like skulls (obviously). And I want something alongside that skull that's right under my neck on the back, too. Something small, cool, and esoteric. There is a pair of raven's claw patches (not the Harry Potter kind, incidentally - that's just weird) that I saw that I'm thinking about, but we shall see. And I might so something more on the front, who knows? For right now, the ritual is complete, and I need to banish it by saying that while I found a really good meditative state and great vibe while doing this working, it's all, as they say in Germany, "Quatsch".

Well, you just keep telling yourself that, anyway.

Back to the Back

The Esoteric Denim project, patch phase, is nearing the end. I say "patch phase" because I also plan, in time, to replace the rivets with skull-buttons. That will be down the road after this whole COVID-19 thing is more clear and when I'm not so worried about potential financial issues. Plus, we are very busy at my house with . . . a huge project. Suffice it to say that this project is the biggest thing we've undertaken in many, many years, so it's a time-sucker.

However, with our social calendar being effectively nullified, I've had time to sew. This is where the back is now: 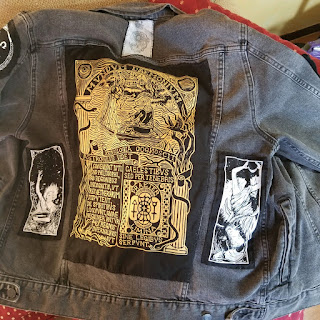 As you can see, the back patches are now all attached. I trimmed the two side patches a little by folding them and ironing them to the same dimensions, then sewing them such that extra fabric on the back of the patch was first wrapped and pulled in toward the patch's underside, then pierced through and sewn into the actual fabric. At the moment, however, are only stitched in place. I need to do a lot of whip-stitching (that's what I'm calling it, anyway) where I will more firmly attach the edge of the patches to the denim and hopefully protect them from fraying, as well.

Let's have a closer look at those ones, again First, the moon-goddess: 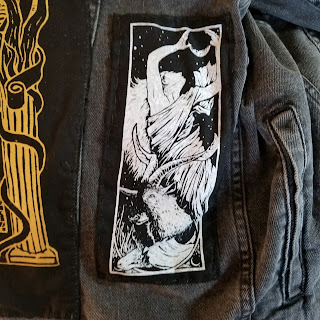 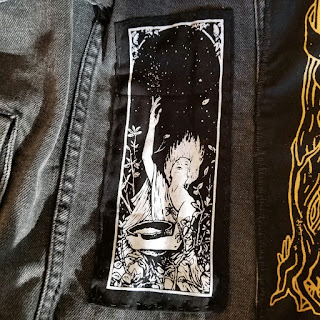 . . . which is one of my favorite patches on the entire jacket.

This leaves only one more patch on the arm to do. But that one is going to take some cutting, as well. I'm feeling pretty confident about my plan for that final patch, though it will, like the side-panels on the back triptych, require a couple of rounds of stitching to be sure it's finished well.

This has, so far, been a therapeutic, meditative project for me. I'm glad I started it during the month of my social media fast. That gave me a good mental head start and kept it from feeling overwhelming. And I would have been finished just in time for Garycon, next week. Now, however, it's turned into virtual Garycon.

I think I'll still wear the esoteric denim while gaming from my desktop anyway. I put in the work, I should enjoy the outfit!
Posted by Forrest Aguirre at 7:51 PM No comments:

The Three Stigmata of Palmer Eldritch

The Three Stigmata of Palmer Eldritch by Philip K. Dick
My rating: 4 of 5 stars

I've read some of his work and enjoyed it. But this was a deep philosophical dive on top of the classic psychological-warping mind games that PKD is famous for. All the tropes are here: a bevy of unlikable characters, each flawed in their own way; a scathing side-wise attack on the supposed values of 1950's America including rank capitalism, political subjugation of colonized peoples (or in this case, the colonizers themselves), and plastic-surgery-enhanced beauty; religious zealotry; and so on. Everything you'd want in a PKD novel is here. I thought I knew Dick. There was more that I just didn't get in my past readings of some of his other works. Really, I don't know Dick.

What really "gets" me about this novel, is that it gets me - right in the heart. PKD is mainly known for challenging readers intellectually by shattering their preconceived notions of reality. There is plenty of that here. In fact, more so, even, than many of his other works. But The Three Stigmata of Palmer Eldritch doesn't rely purely on mind-tweaking to engage the reader. This novel has heart, especially in the chest of the one unlikable person who eventually emerges as the main character, Barney Mayerson. There are moments of genuine emotional pain, a sense of deeply-felt loss, which is rare in science fiction, generally, much more so when one is caught up in the psychedelic gonzo web of a Philip K. Dick novel. Mayerson's past choices and subsequent regrets are absolutely heart-crushing. Atonement is held out as a potential cure for his bad, even cruel decisions, then just as quickly withdrawn as unattainable.

There was such a thing as salvation. But -
Not for everyone.

View all my reviews
Posted by Forrest Aguirre at 6:47 PM 2 comments:

The Esoteric Denim project continues . . . though at a slower pace. Lots of things happening in life, many of them good, that involve a lot of my time. So, I haven't been "on pace" as I was last month. But I can see the finish line. Only three more patches to go! 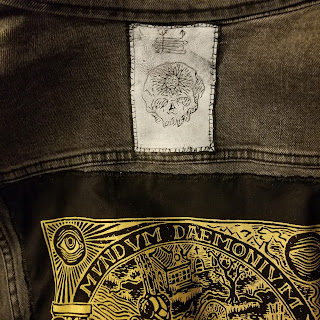 Here, you can see the leather skull patch I've sewn on (in a decidedly Frankensteinian manner). That patch cause more injuries than the rest of them combined, including having the needle plunge backwards into my finger (meaning: not the sharp side, the threaded side of the needle) in a decidedly uncomfortable manner. It was not pleasant. So, yes, I've made blood sacrifice for this project.

On my "triptych", I had been thinking for weeks about how to get the two "ladies" sewn in. These patches are thinner than the rest and cut with differing border widths, so I had to think about how to get them on without tearing them and somehow make the borders more consistent with each other. Then I thought "Duh - use an iron". With this newfound wisdom, I ironed the edges down to more or less straight lines and more or less consistent borders. I was afraid to cut them down because once you've done that, you've done it. And I was worried about the thin material. Folding the edges under and ironing them down resolves both of these issues. So they're pinned in, ready to go. Now to get sewing on them. Here they are, prepped and ready to go: 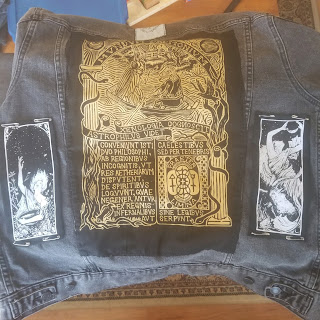 Sorry the picture quality isn't as good. We're actually getting some nice sun coming through the windows here in Wisconsin. Hey, don't spoil the end of winter for me, okay?

As far as social media goes, I'm back on twitter, but waaaaaaaaaaaaaaay less than I used to be. And Facebook? What is that even? Don't remember. Don't much care to remember. Good riddance, Zuckers!!!
Posted by Forrest Aguirre at 1:37 PM No comments: