Blackstar Carcosa: a Hex and a Ritual

With the upcoming fifth anniversary of David Bowie's departure into the unknown caverns of space and time, I thought I might use his song Blackstar, with its incredible accompanying video, as a springboard for some material for Carcosa. You'll need the Carcosa RPG book to fully utilize this, but one might steal elements from this for use in just about any campaign. In fact, I could see this leading to an entire campaign based around the various avatars of David Bowie, a campaign that could last for many years with a wide variety of adventuring flavor. Such a campaign need not be set on Carcosa, but I think that the planet's pull might be irresistible. For those who followed Bowie through his incarnations and who know Carcosa well, I think you will see the connections quite readily. I would love to hear, in the comments, how you might springboard off of this theme. Here are just a couple of short starting points:

The hideout of the Orange brigands has been cleared of their previous inhabitants by a group of Blackstar cultists, who raided the hideout, killing 10 of the brigands and sacrificing the remaining 11 in unknown rituals. The hideout was built into a veritable citadel, the Villa of Ormen, in which a solitary candle burns night and day with an un-extinguishable fire. The cult consists of 13 barren women, one of each color. Strangely, they do not experience the prejudices and racial acrimony that almost inevitably occurs among men of opposed colors on Carcosa. Their leader is a 16th level Bone woman sorceress who is also a powerful psionicist. Each of the other women are 9th level sorceresses that are also psionically gifted. All thirteen are "blessed" with some sort of positive mutation. The Brigands never stood a chance . . .

The narrow cleft in the stony hills has been cleared of it's denizen, the cultist having banished the green ooze to another dimension, and the beautiful green sorceress having been utilized in another ritual. This is sacred ground for the cultists, the place where they witnessed the apotheosis, through ritual and death, of their god, Major Tom. The Bone woman sorceress can almost always be found here, alone, unless she is being joined by her compatriots from the Vila of Ormen. Here she broods and communes with the avatars of Blackstar in his many guises.

Ritual: The Day of Execution

This ritual takes exactly 9 minutes and 57 seconds to complete. It requires the willing self-sacrifice of a Bone man, who willfully plucks out his own eyes and allows himself to be beheaded. Thirteen participating individuals are required for the ritual, one bows and allows the severed head of the sacrifice to be placed on his or her back. The one governing the ritual leads the others as they first jump in a circle, then kneel on the dirt, sweeping the floor in unison with their hair. 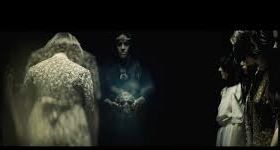 The ritual has several effects:

1) All non-participants within one mile of the ritual center are paralyzed from the moment of the end of the ritual until 9 minutes and 57 seconds later. There is no save.

2) The severed head of the sacrificial bone man speaks, channeling one or more of Blackstar's avatars. For the 9 minutes and 57 seconds that he is able to speak, the one overseeing the ritual may ask any questions of the head, and the head must reply truthfully to the best of its knowledge. Depending on which avatar(s) manifest, the answers may be profound and wise, or something that might come from a drug-addled moron. The avatars know about much more than Carcosa and can sometimes, if questioned properly, speak of far off places with strange names like "Earth", "Mars", "Moon", "The Labyrinth," or even "Blackstar" itself. The answers always come in the form of a poetic song, sometimes beautiful, sometimes dissonant. In the context of Hex 1310, several of these answers have been written down in a book covered in the tanned hide of an Ulfire man. 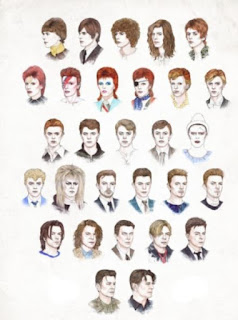 3) The ritual inevitably and uncontrollably summons the Shambler of the Endless Night to the lavender fields nearby the Villa of Ormen. There it roams for 9 minutes and 57 seconds, attacking and eating any who have succumbed to the paralysis of the Day of Execution ritual. The cultists will have crucified three individuals among the fields in order to keep the Shambler distracted from their working in the cavern, but this foul creature is not always satisfied with merely three victims, but will stalk the environs of the citadel for what little time it has. At the end of the duration, the dimensional space around the Shambler explodes, destroying it (for now) and causing one random mutation to all within 100'.

Posted by Forrest Aguirre at 9:05 AM