It's been over a year now. Things are a bit hazy, just like the sky was when we landed in London last July. After a long wait in Chicago (10 hours delay that also cost us £96.75 - thanks a bunch, American Airlines. Jerks.), we took the approximately 8 hour flight over to London. I don't fly particularly well, so I didn't rest much. Pretty much kept my eyes either on the flight monitor map or on my pinball app. I didn't want to watch any movies that might even hint at an air disaster and I didn't need any reminders that the wreck of the Titanic was somewhere far below us. I might have taken a couple of benadryl before getting on the plane, I don't remember.

Morning found us going straight from Heathrow to the car rental place (did I mention the £96.75 in lost hotel fees because of the delay?) where the nice young man there tried to upsell me to a Mercedes. No thank you, I was saving my Mercedes for the Autobahn when we went to the continent the following week (what a great drive that was, but that's a different story).

Here are the taxis we didn't take (but I had to get a picture): 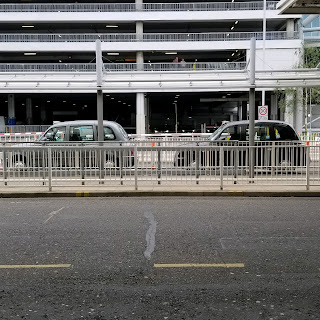 Cute, aren't they? Unless you've been watching Sherlock.

I quickly found that driving on the other side of the road is, frankly, terrifying. I'm surprised my wife didn't just kick me out of the (right hand) driver's side door. I was freaking out - a lot. Eventually, though, we miraculously made it to Oxford, our first stop of the trip. I was so relieved to get out of the car.

We took a double decker into Oxford. Yes, quaint, I know, but it really was the most convenient way to get into town from the carpark. I have to admit it brought back a flood of memories and feelings from when I was a teenager living in England. Back then we'd sit in the back of the top and smoke cigarettes. It might have even been legal back in the '80s, I don't know. Not that illegality would have stopped us. 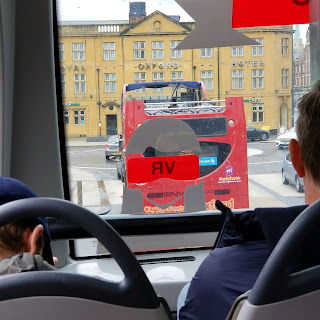 Yes, there's a sign telling you you're in Oxford. Helpful, that.
Our first order of business was filling a dream of mine: Visiting the Bodleian Library. If I had a million dollars, I'd go on a world tour of incredible libraries and bookstores. On my meagre budget, we were able to go to the Bodleian and stop at an Oxfam to buy a book or two later that day. Well, there was the booktown trip to Wales, but that was not this day (why is it I hear Aragorn's voice when I type that?). Here' is the first photo I took: 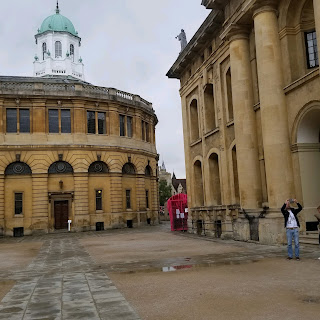 Next, one the courtyard: 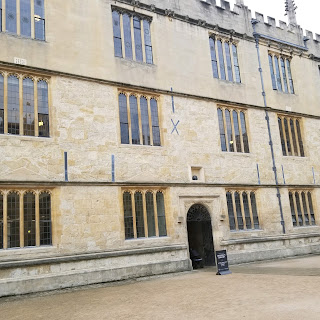 And one of the library's facades, viewed from the courtyard: 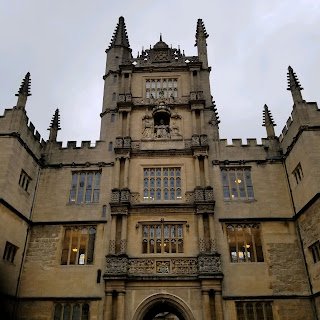 Sorry, fellow Yanks, but America just doesn't have this kind of architecture. This building was older than America itself and yet, there it stood.
We paid our two bits (okay, it was more like twenty quid) and stepped inside for the tour. We started in the Divinity Room, where most of the tour was held. 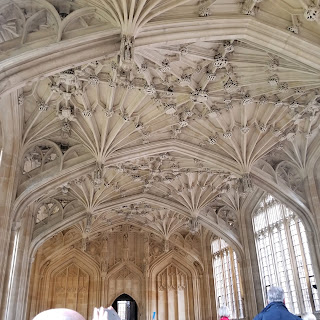 Here's the door we came through. Lots of people were coming and going, so it too a while before I could get a "still" shot of it: 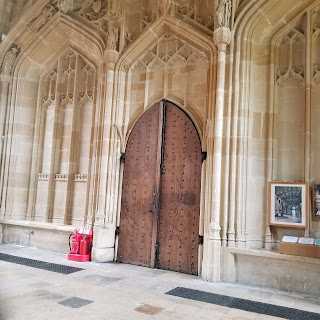 "Wow," you might be thinking "what an architect!" Well, yes and no. There were two architects. One of them an artisan whose name I can't remember. Like all good corporate entities, the board of trustees wanted to cut costs, so they hired another builder (whose name I also can't remember) who was more . . . practical. And less expensive. You can actually see where one quit (I can't remember if he died, retired, or was fired) and the other took over: 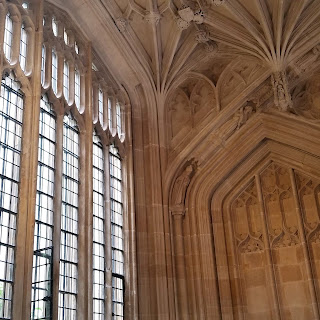 You can see, on this cornice, where the fluted columns give way to something more . . . prosaic. That's not to say the newer part of the build (still older than America, I must add) was not beautiful, it was, just a little less baroque than the earlier work.

Now, rather than continue teasing, here's a shot of the ceiling: 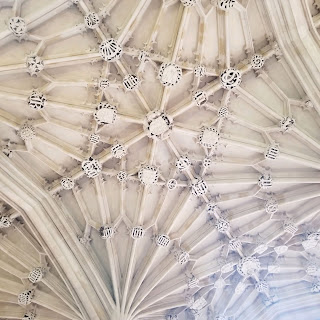 Look closely and you'll see words up there (among other ephemera). They form important religious and scholarly phrases (in Latin, if I remember correctly) that seemed profound at the time. I mean at the time we were there, not just . . . before America.

And, what's this? The Oxford Coat of Arms? Here? You don't say. Of course, it's held up by angels. This is the Divinity School after all. 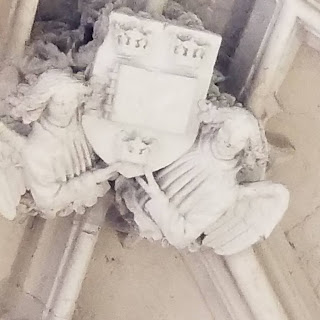 And if that wasn't enough divinity for you, here is . . . um . . . I think it was John the Revelator (is he eating a book? If so, that's him). And definitely a Madonna and Child (ah, fertility cult left-overs): 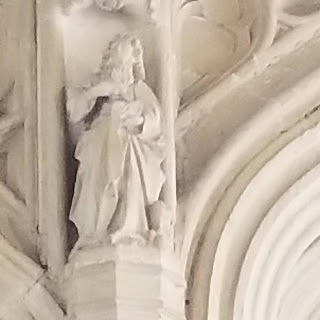 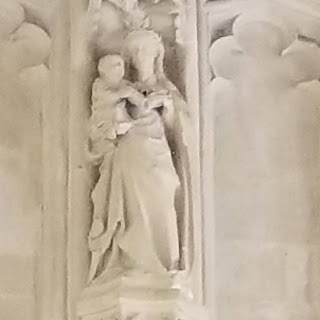 I joke about it, but it really was beautiful. If only my picture-taking skills were as heavenly as this iconography.

Next, we went into what I think was the exam room, where students quivered and fainted in the presence of their examiners: 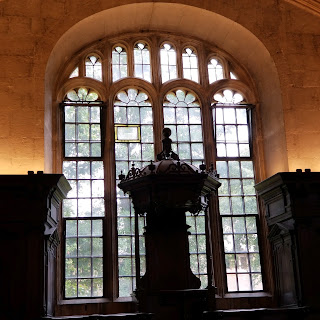 The examiners would stand up behind those pulpits to question students. Not intimidating at all! And, hey, what is that distracting oddity in the window? 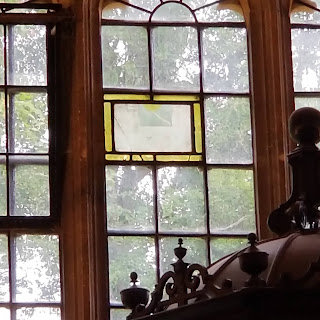 Of course! It's a stained glass . . . sundial? Yes, it is. I would argue that, given it's provenience in England, it was useful for perhaps one out of every three days. But it's a nice gesture, anyway. And, yes, you can tell time by the way the shadows fall (if there's sunlight). Pretty ingenious.

Next, we went into the room where Oscar Wilde was held on trial and kicked out of Oxford. I don't know if this was the place where he was tried and sent to Reading Gaol, but he was definitely kicked out of the university from this place. Here's the imposing entrance: 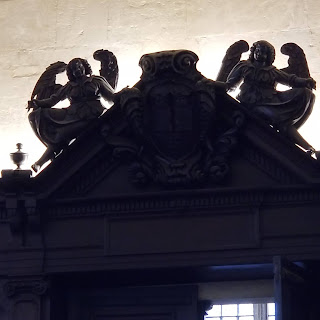 I was too busy being awestruck and touching the table that Oscar Wilde had sat at to take a photo in that room. But my wife took this shot of the paneled walls. Probably the last thing that Wilde saw as his university career was snatched away: 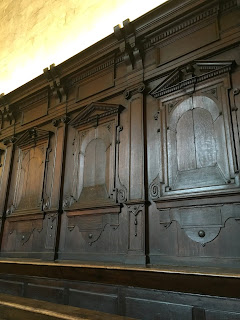 I half expected to see "O.W." carved into the wood somewhere, or maybe "D.G.".

We were then taken up to the holy-of-holies, where we were expressly forbidden from taking photographs - the Medieval Collection, where King Charles I studied in his (and the Queen's) own reserved kiosk(s) after the young soon-to-be-regent asked to have a book sent to him, but was denied by Sir Thomas Bodley himself, who felt he had a sacred duty to hold up the injunction imposed by the Archbishop of London (who had rebuilt the collection after it had been ransacked during the Reformation) that none of the collection could be checked out. This is exclusively a research library! I was also able to see here, in person, my first chained books. And while I would have surreptitiously taken a picture or two (trust me, I totally would have), we had to lock up our cameras and phones before going upstairs to the medieval library. But it was worth it to fondle a couple of medieval chained books!

Many of these "facts" may be misremembered or outright fabrications. What do you expect after an utter lack of sleep for two days straight and having to rewire my brain to drive on the other side of the road?

Lastly, there was this little guy right near the entrance to the Bodleian gift shop. A leering bard, perhaps? 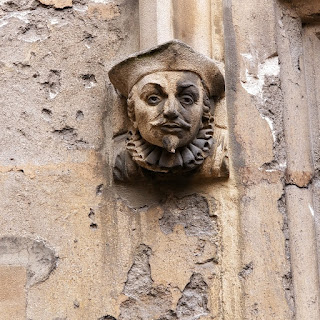 After the Bodleian, we had another appointment - for lunch - at another literary must-see: 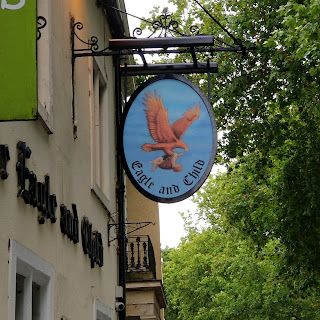 "What's so big about a pub?" you say? Never speak to me again.

This, my friends, is the Eagle and Child, noted as the pub where JRR Tolkien and CS Lewis would hang out and chat over a pint. I understand Mervyn Peake was also occasionally in on the conversations, as are other minor writers whom I will probably never read. 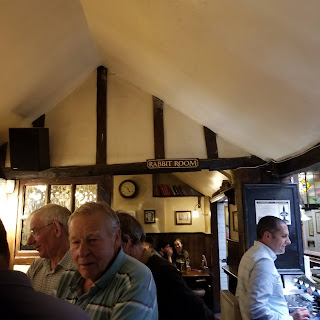 There is the famed Rabbit Room, which was filled with people in various states of drunkenness. We ate down the hall, under a quote by Lewis: 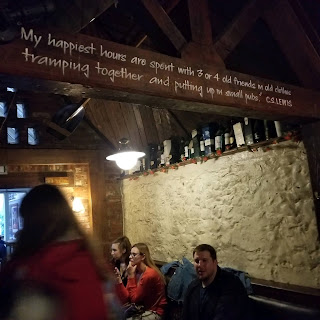 This will surprise those of you who knew me in high school, but I don't drink. Haven't had a drink since I was 18. So rather than enjoying a pint, we got a meal. Fish and chips and smashed peas. And, I must admit, this was the best fish and chips I've ever eaten. Ever. And I've eaten a lot of fish and chips. On that rainy day, this just hit the spot: 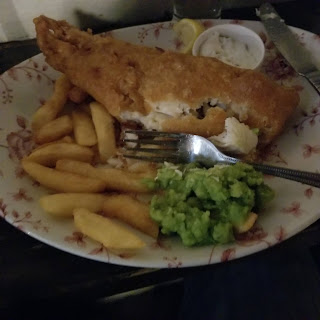 And since my wife wanted to taste English cuisine, this was a dive into the deep end! Satisfied, nay, stuffed, we took our leave of the Eagle and Child, back out into the rain: 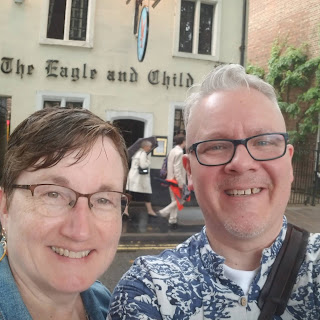 After this, we traipsed around a bit, stopping at the aforementioned Oxfam and a chocolate shop, admiring the beautiful old tudor buildings, among other sights. 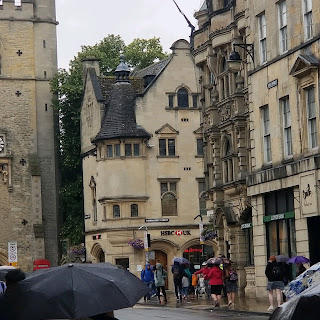 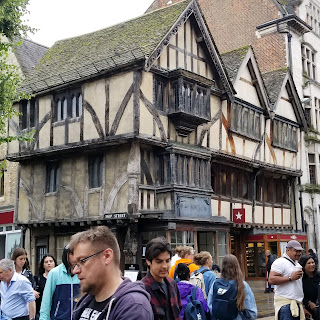 And where else would you expect this? Because: Duh! 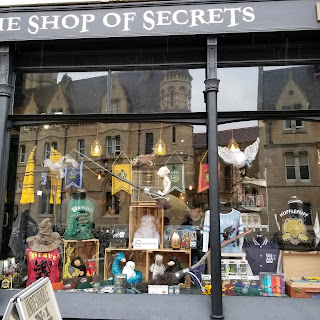 Let's face it: Hogwarts is Oxford, and Oxford is Hogwarts: Magical!
But we were soon driving (*insert terror here*) to our lodgings in Moreton-in-Marsh to get some much-needed rest and have our body clocks adjust a bit. The next day was our trip to Wales and the booktown of Hay-on-Wye. Even now, though, the joy of Oxford lingers. It is truly one of my favorite cities in the world (and I've seen a few). Perhaps someday, money permitting, we can make it back!

Posted by Forrest Aguirre at 7:20 PM