Well, James Raggi made it official in an announcement sent out to those subscribed to the Lamentations of the Flame Princess E-mail list: I have been working for a good two years on a supplement for a developing line of historical books usable with the Lamentations of the Flame Princess RPG. I won't give the title out until James does, but suffice it to say that I'm finally using my Master's Degree for something directly related to my grad school studies back in the day.

As evidence, I present a few of the piles of books I have researched as I've worked on the project: 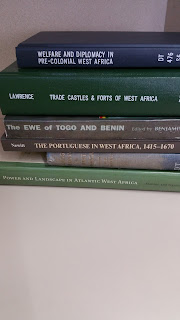 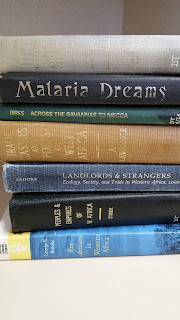 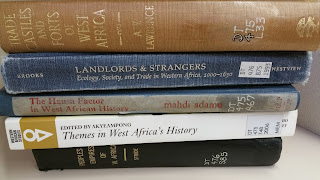 Now, this is barely the tip of the iceberg. I pored over literally dozens of volumes researching this. I spent days - DAYS, full 8 hour days, and many of them, in the University of Wisconsin's awesome Memorial Library doing the research for a supplement on West Africa in the 1630's. This is a fairly exhaustive survey of the lands, peoples, and customs of the region ranging east-to-west from the Atlantic coast to present-day Cameroon and north to south from the edge of the Sahara Desert down to the Ivory Coast/Gold Coast/Slave Coast.

My studies in grad school focused mostly on precolonial and early colonial East Africa (though my Master's Thesis was on later colonialism in East Africa), but we were trained to be broadly conversant in African history all the way around the region and for all historical time periods. So I had several courses and wrote several papers on West African history back in the late '90s. Nevertheless, I hit the books hard for this project and poured a great deal of effort into the research, construction, and writing of this survey. I wanted to do something that could go well beyond role-playing games, while retaining RPG use as the primary thrust of the writing.

The initial draft is done, edited, and submitted. I am awaiting another, related project, which I need to leverage, in order to complete my work. This will require a thorough rewrite of one particular section of the book, which I'm actually very excited about. Then, it's on to working with the cartographer for maps, working on the book design, etc. I can't give away the secrets yet, but this projected line of books that James has just announced will be an awesome addition to your LotFP library, your RPG library, or just your plain old library (for those who are history buffs).

I've written the book I wish I had in grad school, at least the one with a focus on early 17th-century West Africa. A huge amount of effort has gone into this - about the same amount of effort that went into writing my Master's Thesis itself, which was an incredible undertaking. I haven't poured this much effort into a book since my novel. And writing this might actually have been more difficult. Actually, yes, it definitely was more difficult. Writing non-fiction is a lot like real work!

More news as it happens and I'm allowed to share it!
Posted by Forrest Aguirre at 4:51 PM 6 comments: