In case you're looking for me at Gameholecon this week, here's where I'll be: 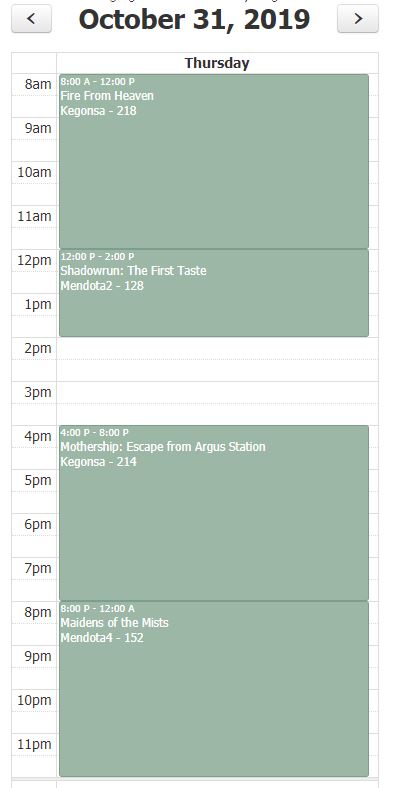 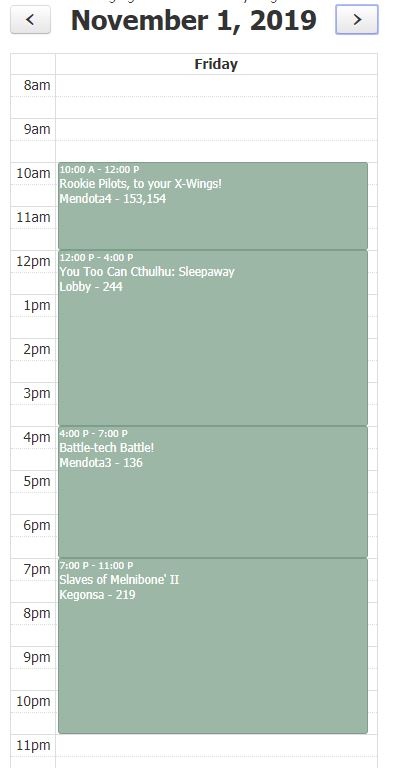 I won't be there Sunday, but I will be there Wednesday night, probably running something off-books.

See you all there!!!

Posted by Forrest Aguirre at 12:23 PM No comments: 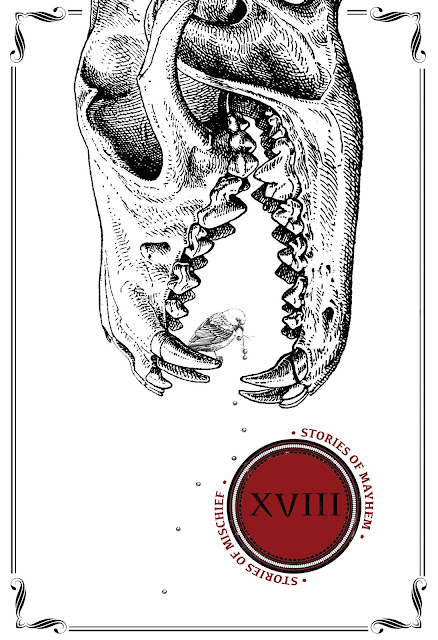 I am proud to announce the inclusion of my story "Gemini" in the upcoming anthology XVIII, a part of the sure-to-be-outstanding Underland Tarot series, based on the Major Arcana, published by Underland Press. The TOC list follows:

Especially grateful to be TOC mates with Darin Bradley and Josh Rountree, both of whom have inhabited a nearby segment of the literary astral plane as myself. If you haven't checked out their writing before, repent and go forth and read! Congratulations to everyone!
Posted by Forrest Aguirre at 1:31 PM No comments:

I am reminded of the more psychedelic instances of Decadence Comics, but less psychedelic and much, much more mystical. This is an introspective graphic novel. Now, you don't have to have read Lanterns of the Old Night to fully enjoy this wordless wonder, but one's insight is accentuated, having read it.

View all my reviews
Posted by Forrest Aguirre at 9:48 AM 1 comment:

Mothership: Dead Planet by Donn Stroud
My rating: 5 of 5 stars

A few years back, I raved about the ingenious and innovative design of the role-playing supplement Vorheim. With Dead Planet , Fiona Maeve Geist, Donn Stroud, and Sean McCoy have taken those innovations and built (with cybernetic implants and a dash of sorcery, no doubt) what might be the best RPG supplement I have seen in ages, surely the best Science Fiction RPG supplement I've seen in many, many years. The judges of the 2019 ENnie Awards agree with me (or, perhaps, I agree with them?), awarding the supplement the Silver award for Best Adventure, right behind Chaosium's amazing Masks of Nyarlathotep (let's face it, no one was going to beat Masks this year).

How do I characterize Dead Planet? Take part Pandorum, part Alien and part Event Horizon and map the tropes not only on a ship, but on an entire planet (the Dead Planet) which is surrounded by orbiting derelict ships.

The first section gives an example ship, The Alexis, and a mini-adventure/exploration that would make a great one-shot (at least I hope so - I'm running a Traveller hack of this for my weekly gaming group next week!) or introduction to a Dark Planet campaign. Following this is a derelict ship generator that allows the Game Master (or "Warden" if you are playing the Mothership Sci-Fi Horror RPG - also an ENnie winner - for which Dead Planet was written) to create as small or as large as of a ship as desired by throwing dice and consulting easy-to-use tables (yes, this includes generating a map on the fly, randomly, as well). Then, find the Moon Colony Bloodbath section - a mini-campaign packed into a zine, essentially. But without the usual "quirkiness" of zines (I know, I know, I've made my own, I know . . .) - no, this supplement is eminently usable at the table. Everything you need is here or can be generated on the fly quickly and efficiently by the Warden: facilities, planetary maps, NPCs, competing factions, monsters (some human), and more random charts than you will know what to do with, but which will all become useful in a mini-campaign. Dead Planet has it all! So put on your vacsuit, charge up that vibrachete, and get ready for action. Just remember, as the old saying goes: "In space, no one can hear you scream!"

View all my reviews
Posted by Forrest Aguirre at 3:04 PM No comments:

The White Goddess by Robert Graves
My rating: 4 of 5 stars

I came for the witchcraft, I stayed for the poetics . . .

While I was on my one-day book-procurement trip to the "booktown" of Hay-on-Wye, Wales, I stopped at Richard Booth’s bookshop (among many others) and picked up Robert Graves’ The White Goddess. I knew, vaguely, that the book was about the witch cults of Great Britain and something about druids, and that’s about it. I had read several works that referenced Grave’s book, so I thought I’d cut to the source and see what all the fuss was about.

I had expected an erudite study of witchcraft and its antecedents, replete with thorough bibliography and oodles of footnotes.

In fact, the book hardly mentions witches (by name, at least) at all and there is no bibliography. There are some footnotes, but they are sometimes even more cryptic and self-referential than the text itself. But I was far from disappointed.

The White Goddess is one of those books like Gödel, Escher, Bach or Hamlet’s Mill: a rumination, of sorts, that only a genius will fully understand on the first read through, a work rife with speculation and some arguably false jumps in logic, but a brilliant work, nonetheless. It is, above all, Grave’s (very well-informed) opinion. I’ve read other reviews panning the work, and I had my problems with it, but I don’t think that it should be rejected wholesale.It is a deep, deep well to draw the waters of knowledge from.

Yes, Graves jumps from god to goddess, from tree-species to alphabetic characters, from stag cults to bull cults, then from the masculine bull-cult to the feminine partridge-cult, implicating everyone from Achilles to Christ in the process, and ends with a horribly trite last couple of chapters about politics and religion that could (and should) have just been abandoned. Graves isn’t apologetic about his promulgation of his own opinions and the fact that he is openly exploring the subject as he writes, either. I find it commendable, actually, that, at one point, he openly admits that some of the answers to the questions he was exploring came to him as he was meditating, as in doing a formal meditative practice. He’s not beholden to the sometimes-stultifying idea that ideas need to come in some sort of controlled laboratory environment. In fact, Graves shows a certain disdain toward formal academia, especially as it dulls the poetic senses:

. . . there are no poetic secrets now, except of course the sort which the common people are debarred by their lack of poetic perception from understanding, and by their anti-poetic education (unless perhaps in wild Wales) from respecting. Such secrets, even the Work of the Chariot, may be safely revealed in any crowded restaurant or café without fear of the avenging lightning-stroke: the noise of the orchestra, the clatter of plates and the buzz of a hundred unrelated conversations will effectively drown the words – and, in any case, nobody will be listening.

I wonder, somewhat, though, whether or not Graves was trying to inoculate himself against arguments from the outside that perhaps the rigor of his research was lacking? While I feel sympathy and agreement with Grave’s anti-University tirades (he has a couple in the book, both reflective of some of the feelings I had and have about graduate school), I also fear that populist anti-intellectuals might use his arguments as justification for their own (usually racist and/or misogynistic) goals. Though Graves only really argues against the problems of formal college education, his sentiments could easily be twisted into anti-intellectual arguments, the sort of which feed reactionary movements. But, since he takes a secularized view of Christianity (and, in fact, pushes for a further split between the views of the Historical Jesus and the Mystical Christ), such reactionary movements are likely to become very confused by Graves’ work. Besides, the gaps in Graves' arguments regarding early Christianity are big enough to drive a semi through. Still, I like his chutzpah and the fact that he's willing to play the provocateur, as he forces the reader to think about exactly why he's wrong. It's almost like he's taunting his audience into reacting.

As a result of all this deconstruction and reweaving of myth, it is very difficult to pin down Graves theses. One thesis is that of the poetic continuity of the worship of The White Goddess in ancient times through the Irish and Welsh poetic traditions (by way of the Greeks, mainly the Dannites, if I understood correctly) and even further through the cult of Mary and Jesus. Much of the last half of the book is dedicated to these arguments. I found them somewhat convincing, but I still have strong doubts about a few of his inferences regarding some sects of Christianity and the Jewish tradition from which they stemmed.

Though there are many other sub-theses that I will not address, the third thesis that I found to be of most interest was probably more incidental than central. I also found it to be the most poignant. It has to do with methodology and echoes with some of the same laments as the earlier-quoted paragraph. Graves says:

What interests me most in conducting this argument is the difference that is constantly appearing between the poetic and prosaic methods of thought. The prosaic method was invented by the Greeks of the Classical age as an insurance against the swamping of reason by mythographic fancy. It has now become the only legitimate means of transmitting useful knowledge. And in England, as in most other mercantile countries, the current popular view is that ‘music’ and old-fashioned diction are the only characteristics of poetry which distinguish it from the prose; that ever poem has, or should have, a precise single-strand prose equivalent. As a result, the poetic faculty is atrophied in every educated person who does not privately struggle to cultivate it: very much as the faculty of understanding pictures is atrophied in the Bedouin Arab. (T.E. Lawrence once showed a coloured crayon sketch of an Arab Sheikh to the Sheikh’s own clansmen. They passed it from hand to hand, but the nearest guess as to what it represented came from a man who took the sheikh’s foot to be the horn of a buffalo.) And from the inability to think poetically – to resolve speech into its original images and rhythms and re-combine them on several simultaneous levels of thought into a multiple sense – derives the failure to think clearly in prose. In prose one thinks on only one level at a time, and no combination of words needs to contain more than a single sense; nevertheless the images resident in words must be securely related if the passage is to have any bite. This simple need is forgotten, what passes for simple prose nowadays is a mechanical stringing together of stereotyped word-groups, without regard for the images contained in the. The mechanical style, which began in the counting-house, has now infiltrated into the university, some of its most zombiesque instances occurring in the works of eminent scholars and divines.

I may not agree with the vociferousness of Grave’s obvious rancor, but I agree with the premise. We have lost the mindset of poetics, having surrendered to a stiff logic that doesn’t allow for the breadth of poetic expression and, in fact mocks it as an obfuscation of clarity. But this obfuscation was intentional, meant to keep the secrets of the mystical cults of the past, to hide the mysteries of life and the universe to all but the initiated. The initiated have been suppressed, in the modern age. As a result, the skill of poetic interpretation has died on the vine, and we may never be able to bring it back. However, I feel that there will always be a poetic underground that does the work necessary to carry on the essential esoteric tradition of the bards. I hold a hidden hope.

There is a fantastic interview of Graves here.

View all my reviews
Posted by Forrest Aguirre at 6:28 PM No comments: