Reid San Filippo, creator of Crawling Under a Broken Moon and all around great guy, has announced the kickstarter for his "Umerican Survival Guide," a sourcebook for post-apocalyptic gaming based on the Dungeon Crawl Classics rules set. I am SUPER pumped about this kickstarter. Reid has been creating some amazing material for quite some time now - material that can be used far beyond the bounds of DCCRPG. If you're a fan of Thundarr the Barbarian at all, you'll find a lot to love here, as Umerica is steeped in the tradition of your favorite sun-sword wielding, fur-clad wizard killer.
Here are Reid's own words:

Please go to https://www.kickstarter.com/projects/276689953/the-umerican-survival-guide to read more about the project and see all of our amazing pledge options.

Thank you for all of your support,

There are two covers available, my favorite is the Delve cover: 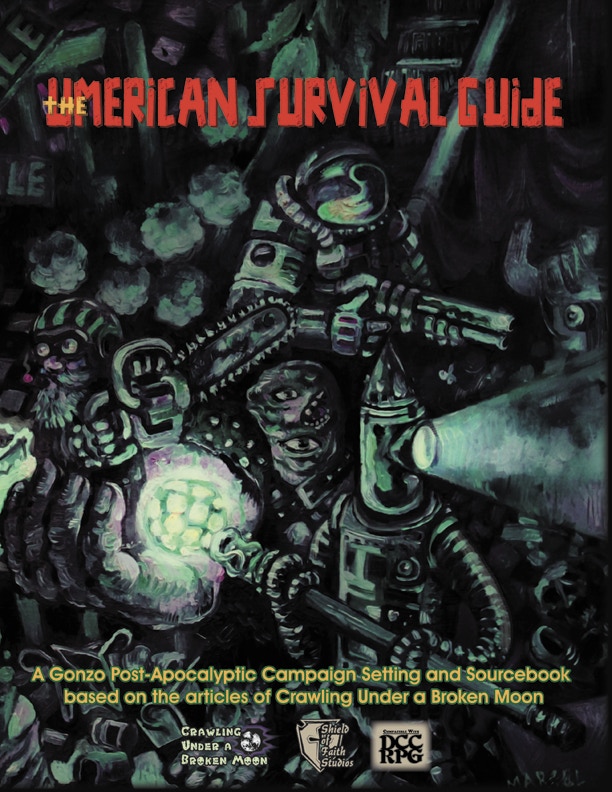 This is the sort of iconic art that is going to be referred to for years to come!

The Chase cover isn't too shabby, either: 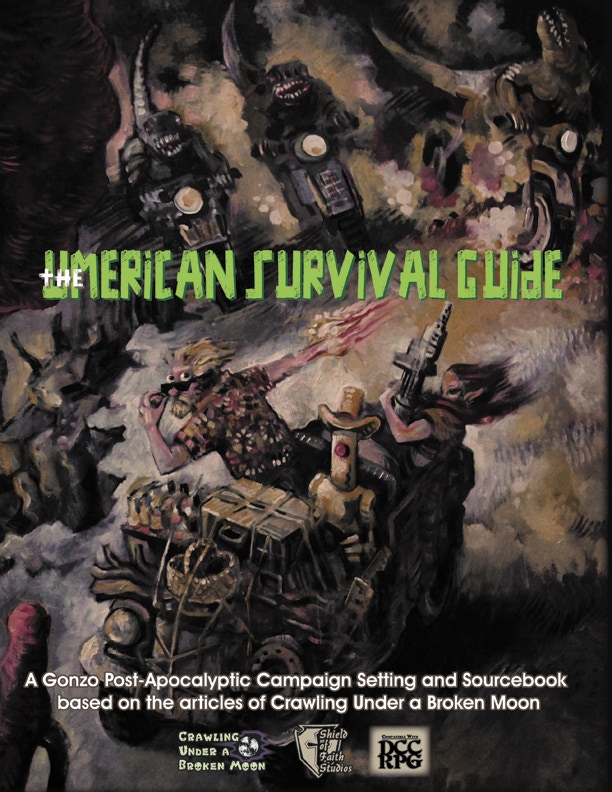 I mean: Velociraptors on motorcycles chasing mutants and robots - HOW COOL IS THAT?!?

So get on over to the kickstarter. If it hits the $14,000 mark, I will be adding my adventure Killer of Giants to the mix. Here's the summary:

"In the days before Disaster, the Ancients hid stars inside great pillars buried deep beneath the ground, unleashing their unholy powers. Some still lie slumbering, entombed under the crust of Umerica. Great treasures are rumored to sleep with them. Do you dare try to wake The Killer of Giants? This mini-sandbox adventure takes explorers directly to the heart of the destructive devices that heralded the dawn of the age of mutants. Dangers contemporary and ancient abound, on the land, under the ground, and in the sky. Explorers will need to use every ounce of their wits and brawn to master what even the Ancients could not. Will these discoveries bring enlightenment or usher in an even more intense localized dark age? Only the explorers themselves can decide!"

So, please, back this kickstarter and tell ALL of your gaming friends on Twitter, Google+, Facebook, and anywhere else you can be heard. Let's make this one a resounding success!
Posted by Forrest Aguirre at 6:47 PM 2 comments: