The Double Star and Other Occult Fantasies


Jane de La Vaudère's The Double Star and Other Occult Fantasies came highly recommended to me from some readers whose opinions I highly regard. Those kind of expectations set me on edge, sometimes, as I'm prepared to be disappointed because, well, taste is taste, and no one has exactly the same taste. I went in, then, with a little trepidation, but some excitement, as well. I steeled myself for the worst . . .

. . . then I melted into the pages. I found myself oozing into a pool of decadence and supernatural fantasy. And though there were moments that tested my patience (more on this later), it was an enjoyable read. A good read, bordering on great.

Kafkaesque suffering and injustice meet Borgesian ecstasies in the mist of a Coleridge opium-dream in "Emmanuel's Centenary". The poetics here are extraordinary and the plot at once excruciating and sublime. The voice is beautiful and terrifying. Heaven and hell, all at once.

"A Vengeance" may or may not have a supernatural element to it. The reader's tilt, in this regard, will determine if the story is a piece of horror or simply a thriller. At issue is a statue and whether or not said statue had . . .intent. It all rides on this. It is an effective story in pushing the reader to make a decision and thus become more vested in it. I, for one, lean hard to intention!

The titular story, "The Double Star" is a hallucinatory phantasmagoria of celestial imagery and occult symbolism. At moments a bit pedantic about non-vegetarians, it still shines with a certain gnostic luster, albeit of dubious philosophical merits. I'm making it sound like I didn't enjoy the story, but I rather did, in fact. Just a titch condescending is all. Really, a marvelous read!

Mesmerism and a strange form of vampirism combine in the decadent tale "Reincarnation". And by "decadent," I mean clearly in the vein (pun intended) of the Decadent writers of the end of the 19th-century. A Dorian Gray-esque mechanism of transference is used to restore life and love. The story became a little long in the tooth with elaborate explanations of occult philosophy in the middle. It wasn't unbearable, but it was tedious. Very tedious. I noted this tendency in a few of the stories herein. I could have done with much less explication and more showing of doctrinal and theoretical concerns through the characters' dialogue, through action, or through the story structure itself. It's not a deal-breaker, but definitely slowed things down and dampened my enthusiasm. This story ended differently than I had expected, but in a guilty-pleasant surprise. I shouldn't have liked the ending, but I did.

"Astral Amour" suffers from the same structural weakness-of-frame as "Reincarnation", and is more predictable in its ending. It is not quite as effective as the preceding tale, but it still stands with a high degree of quality and writerly aplomb. For example, this story contains the most eloquent description of anti-natalism I've ever read. And making anti-natalism into a thing of eloquence is quite a feat (just ask Thomas Ligotti).

One day, I learned that Viviane was a mother. I conceived a profound chagrin in consequence, for it seemed to me that the little being who was scarcely breathing would take all the solicitude of the woman. Nature has determined that there should be an infinite tenderness in maternity, in order that the torture of childbirth should be braved and desired even by those faint hearts who do not understand the futility of their mission and the cruelty of their obedience. An admirable folly that consists of making with one's flesh and blood sad and paltry beings whose life will be spoiled by the thought of death, and who will toil daily without a single moment of real happiness! A proud folly that consists of building temples and palaces that the wind will sweep away, and which will have scarcely more duration than the pygmies who constructed them!

"Yvaine" is a convoluted, engrossing tale of love, betrayal, incest, murder, black magic, and spectral vengeance. The framing mechanisms' dated feel do not lessen the impact of the story. Like all great horrific tales, this one extends far beyond the pages, with an ending full of frisson. How this story was not anthologized several times over, I don't know. To me, it is a Classic. This story is worth the full price of the book and then some.

"Sapho" is a clever little story. Very clever. Very short. Who is the real hunter and prey in this tale? It all depends on your perspective.

Another circus story, this one entitled "Red Lust," isn't quite as effective as "Sapho," as it misses the cleverness of the former tale. La Vaudere has a fascination with black panthers and circuses, I've noticed. Still, a good story, well-told. It could have benefited with a little more background on the antagonist, Antonia.

"The Dream of Myses" is, indeed, a nightmare, albeit a poetic one. The story is of the much and rightfully-maligned "it was all a dream" type, but in an inverse fashion. I'm also not a big fan of stories set in ancient Egypt - I don't know why, I just don't like the setting. It's a good story with strengths, but it didn't astound me like some of the others in this collection.

Though stilted, in places, this is a strong collection. "Yvaine" is one of the stronger stories I've read in a while and, as I said, compensates for the price of admission all on its own. The other stories range from rather good to outstanding, and de La Vaudère's signature voice can be heard throughout (undergirding a variety of voices from here varied characters, some of whom are quirky enough that you might identify people you know "in" them). If I saw an anthology with one of her stories in it, I would be sure to pick it up, as I am certain that her voice would add strength that otherwise might remain unseen, if we are only to rely on the male decadent writers, as good as some of them are. I would hope that future decadent anthologies would include her work, particularly as translated by the inimitable Brian Stableford. Her voice must be heard!

View all my reviews
Posted by Forrest Aguirre at 7:21 PM No comments:

Mörk Borg by Pelle Nilsson
My rating: 5 of 5 stars

I was first attracted to this RPG by the black-metal aesthetic, truth be told. I was pleased to find a rules-lite RPG heavy on creating atmosphere and, in particular, one that builds that atmosphere into character creation and history. Character quirks, habits, and background are amazing and dark, dark, dark. These are true murder hobos! The mood here shares similarities to Mothership and the setting book Vorheim.

The character classes (all optional - you can play without classes) are excellently constructed, both in terms of their strengths and weaknesses. Truly unique abilities and disabilities accrue to each class. All the ad-hoc home rules you've always wanted for creating a scumbucket character? They're here.

The monsters who these broken characters will face are equally evocative. For example, "Lady Porcelain" are vengeful undead spirits of murdered children inhabiting porcelain dolls in which their bodies had been entombed alive. YAAASSS!!! And they bite!

Speaking of things horrific, the adventure included herein, Rotblack Sludge is a tough little dungeon (a true, actual dungeon, in the old medieval sense) that will most definitely kill careless characters. Those who are very careful *might* survive. It's a short adventure, probably one session-worth, or two if the players are as careful as they ought to be. A nice addendum that fits the mood perfectly.

This is unlike any other RPG book. The dark poetry of the words and art lets the campaign setting breathe into your brain. It will infect you. You have freedom to despair under the crushing blackness of Mörk Borg . . . however you like! The campaign is more than a setting, though, it is a summoning, an evocation. Brilliant in all its darkness. Oh, and look for the glow-in-the-dark sigils on the spine. Yes, you read that right . . . but it may be the last thing you see in the dark, ever!

View all my reviews
Posted by Forrest Aguirre at 2:59 PM 2 comments:

I am very happy to announce that my book The Varvaros Ascensions will soon be available from Mount Abraxas press! I have loved Mount Abraxas books (and their sistercompany Ex Occidente) for quite some time now and have longed to have work printed in one of their beautiful books. Now is the time. Inquiries about purchasing should go to the email address listed in the announcement below. I am also including rough-cuts (not fully complete) of some of the wonderful art that will be a part of this volume.


Forrest Aguirre is the Winner of World Fantasy Award (2003) and THE VARVAROS ASCENSIONS is his first exclusive book for Mount Abraxas Press.
A collection of two novellas, published in the same series of tall, oversized books as SALT FLOWERS FROM THE YEARS OF DROUGHT (Colin Insole), THE VARVAROS ASCENSIONS is an astonishing, intoxicating, heavy slab of Weird and Fantastic Literature.
The book's feverish artwork is by the amazing Valin Mattheis.
An obscure bibliographic reference to "The Arch: Conjecture of Cities" leads a student of Urban Planning on an obsessive search, resulting in the discovery that at the root of all cities are people; mostly oblivious to the part they play.
"The Ivory Tower" links the chains between the deep history of mankind's emergence from the bowels of the earth and its reaching up into the cosmic void.
Both works explore the question: does Man create civilization, or does civilization create man?
A black curse, an endless wound and an invocation of Nihil for all clandestine dreamers.
Hail, hail the Nightmare!
exoccidente@gmail.com 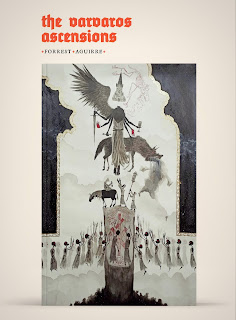 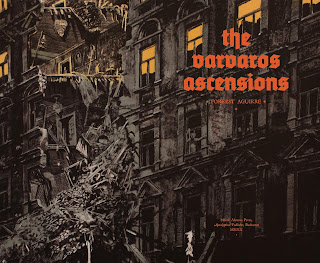 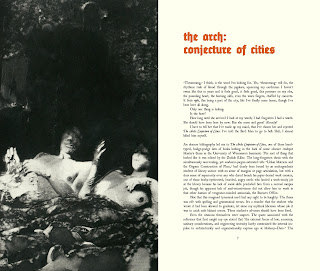 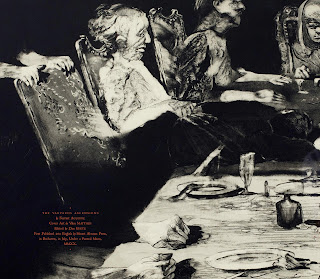 If you'd like to purchase any of my other books, books I've edited, or books from publishers I may have worked with in the past, please check out this blog post, which should have plenty to whet your appetite!

Some Books for Sale

I have just moved out of my residence of the past 18 years, from Madison, WI to Janesville, WI, due to a (welcome) change of employment. In clearing out the old house, I happened upon several boxes of books that I had stored from years ago, back in the day. These books are in mint condition, straight from the printer (into a box, then into my storage for several years). Note that they are all softcover, except for Leviathan 4 and Homefront. I will protect them as best I can, but will ship them Media Mail.
New: Buy 5, get one free. You tell me which one you want for free. Seriously!

There are some great titles here (if I may say so myself). If you want to buy one of the books that I authored, appeared in, or edited, and you want a signature, just tell me so. Shipping in the Continental USA is included in the cost. I will list the title, author, the initial number of copies I have for sale, and cost/ea. I won't be updating the number of copies, however, so you'll need to check with me to see if the book(s) you want is (are) still available. I've priced these to move, checking Abe Books to ensure that my prices are low, if not the lowest. And if you buy one of my books from elsewhere, I can't sign it! Email me at experimentaleditor at yahoo dot com to discuss payment.

And what am I going to buy with this money, you ask? Duh. Books. Just not as many.

Please, please, please tell your friends, share, retweet, repost, whatever, as I really want these off my hands. There will be more, down the road, as I have others I need to offload, as well. But for now, here . . . . you . . . go!