Several years ago, I wrote a post on my "Writer's Hideaway". Since that time, well, a lot has happened, not the least of which is a move from Madison, Wisconsin to Janesville, Wisconsin, at the height of the pandemic. This was to cut the commute from Madison to my then-new job in Whitewater in half. Very long story short, after having a house in Delevan fall through on us (a dream house, in many ways - that one still hurts), we found a place in Janesville, which has its benefits (living a mile away from my grandkids, for example).

One big benefit was being able to move out of my basement writing cave in Madison to a much less dank writing area here in Janesville, up on the second floor. I've moved up in the world, as they say. So, as I did then, I thought I'd do a mini-tour now that I'm mostly settled in there after a year and a half. Your interest may vary, but this is my little microcosmic world where I can immerse myself in the imagination and bleed my ideas onto the page. Not that all my writing takes place here - I will write anywhere and everywhere when the mood strikes. I keep a little notebook and pens with me wherever I go just for such occasions. But when I want to dig deep and experience the ritual magic that is the writing exercise, this is my holy-of-holies. 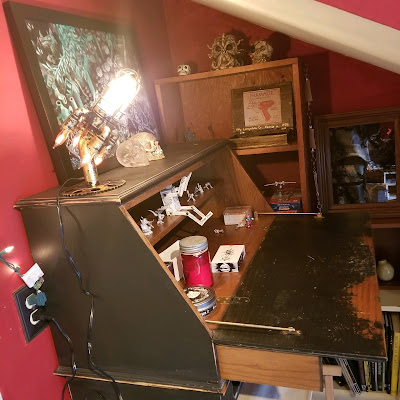 We'll start at one of two desks. In all honesty, I don't use this desk much. Once in a while, when the mood strikes. It's nice to have options, I suppose. The rocket lamp in the photo obscures the original painting I bought, which is one of two covers for The Umerican Survival Guide. This is the original oil painting of the "Delve" cover, and it's a beaut. You'll also see some of my unpainted miniatures (mainly Call of Cthulhu nasties and martians), a candle, my deck of Moebius trading cards, a can of Crazy Aaron's Thinking Putty (magnetic version) for meditative purposes, and my tarot deck by Micah Ulrich (which gets a lot of use in my writing, believe it or not). There are some skulls and spaceships back there (dunno if you can see my space battleship Yamato or not), and probably lots of other inspirational knicknacks I'm forgetting because I'm not in that room at this moment. 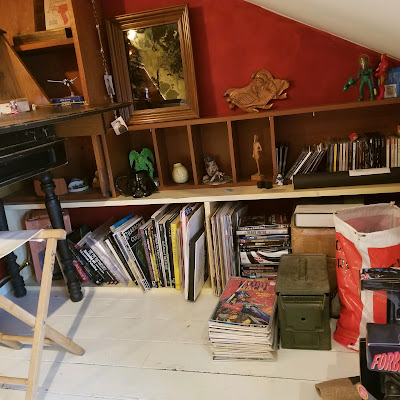 You can probably see why I don't often write here. This used to be an attic, and the ceiling is very low here, even for a shorter than average guy like me. It's cozy.

Here you can see my collection of art books, my very small (and very particular) vinyl collection, my very small and very particular stack of DVDs, my very small and very particular stack of CDs, my collection of Grimjack comic books (No, I don't have all of them. If you have some you want to sell, message me!), and sundry other knicknacks, some of which are original art made by me or my kids or my wife's students (when she taught - she's happily retired now). Also, a chain of pictures of my kids from when they were much younger, and an antiqued mirror, which I should buy more of . . . The antiqued mirror plays tricks and causes illusions and visions that I use in my writing; a sort of hallucinogenic scrying stone. To the right, outside of the picture, are a couple boxes of my novel Heraclix and Pomp (softcover and hardcover). If you're interested in getting a signed copy from me, message me. 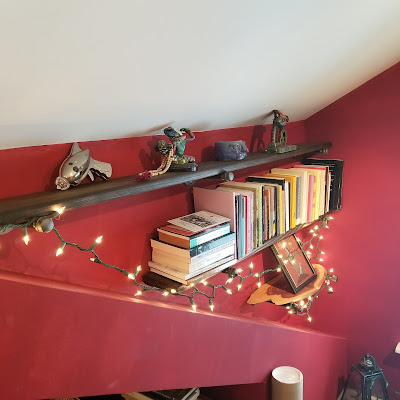 Turning clockwise, you'll see my shelf containing two rayguns, an incense burner hand-carved by famed Poppet artist Lisa Snellings, and a ceramic piece of a face I did in high school (I'm still pretty proud of that guy). Some books, of course - too many to list here - are under that. And at the bottom, a print by Valin Mattheis (who also did the cover art for my book The Varvaros Ascensions). 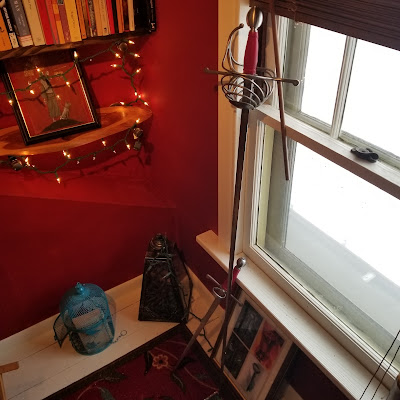 Just below that is "sword corner" where I keep my Darkwood armory rapier and dagger. There's also a lantern there and a birdcage containing a paperback copy of Edgar Allen Poe's The Raven, along with over a dozen origami ravens a friend made for me. They are hard to keep fed, but I am rather fond of them. 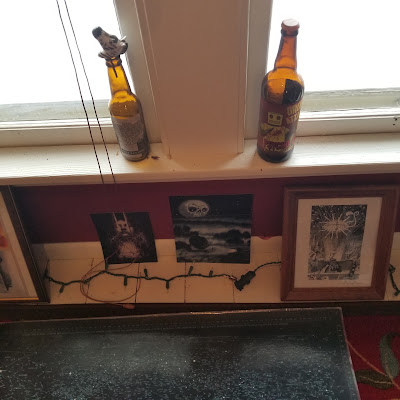 Looking to the right of sword corner, I have couple of bottles sitting on the window sill over some art. I don't drink, but the bottle on the left was a homebrew rootbeer with the Heraclix and Pomp cover on it that my agent brewed up years ago for the H&P release party. Next to that is an empty bottle of a beer concocted by the band Droids Attack. I used to work with Brad, the lead singer, and he gave me this. If you're into heavy music, definitely check them out! 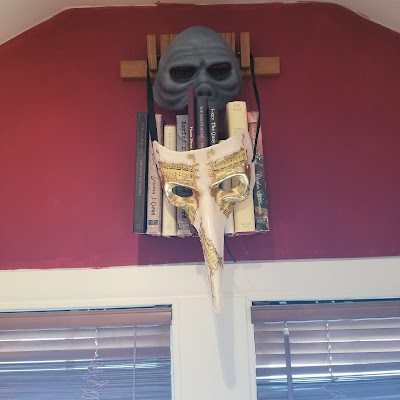 Looming above this is a wall-mounted book hanger loden with some of my favorite books. A venetian mask and the face of one of the doctors from the Twilight Zone episode "Eye of the Beholder" keep vigilant watch - except on Halloween when one or both of them attach themselves to my face. 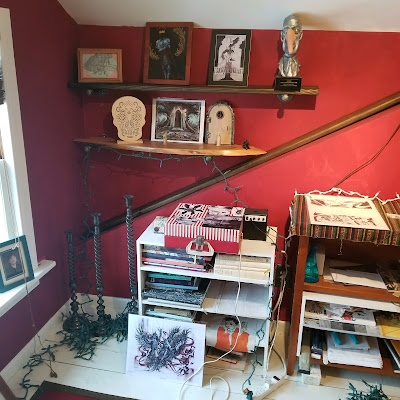 Lots of art in this next area. A picture of my wife on the left windowsill keeps me in line(!), while candles, bookshelves, and my old record player (more on that in a moment) underlie shelve containing a drawing by myself, more Valin Mattheis art, my World Fantasy Award 2003 trophy (replete with pinocchio nose on Lovecraft's face), a piece of art by my friend and artist Doug Kovacs, a day of the dead color-shifting lamp thingy, a faerie door made by an old co-worker, a couple pieces of statuary by Green Man Gate Keeper, and a bronze piece of an astronaut reading a book I bought from Vince Villafranca. 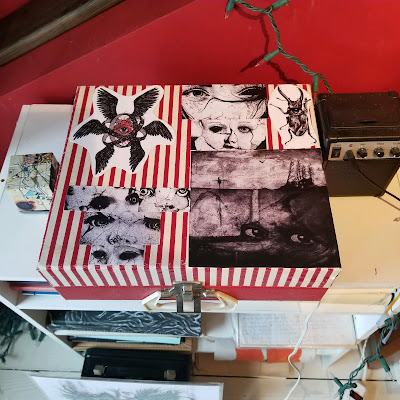 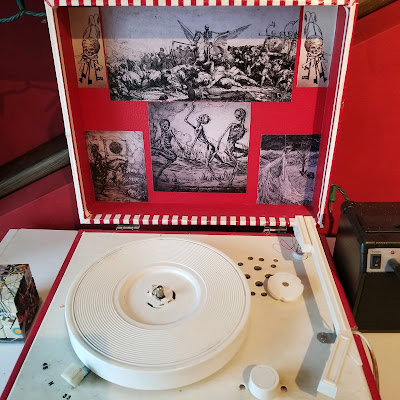 Now, forgive an aging man as he grows nostalgic. After my parents died, I was going through their stuff and found my old record player. I'd listened to records on this thing from about 1979 to the late '80s, when I left home. Because of the nature of that departure (long story), I didn't take this with me. Besides, I had another stereo that went with me then (and was subsequently stolen from storage in the early '90s). But this machine, along with a really crappy cassette player/radio/boombox, was the machine on which my love of music was forged. I'm guessing that the first record I played on here was my 45 RPM of The Hobbit, you know the one, with the Glenn Yarbrough song and all?
So, when I found this in my parent's house, I honestly cried. I had so many memories, so many hours tied up in this thing. I can't overstate its importance in forming my life. It really is that meaningful.
But it needed an update! So, I learned to do decoupage, found some awesome dark imagery, and redecorated it. I might do some more work on it, who knows? And since vinyl is now back in style, I've picked up a few select records to play on it, crappy, scratchy audio and all. A few weeks ago, I spent hours just listening to some of these records and watching the disks spin. I had forgotten how much of a calming meditative exercise that can be (even when listening to heavy music). That's some inexpensive therapy there!
Incidentally, if I used your art on my decoupage, I'm not making any money off it. Nor am I making any money off this blog. Please don't sue me, okay? Thanks. 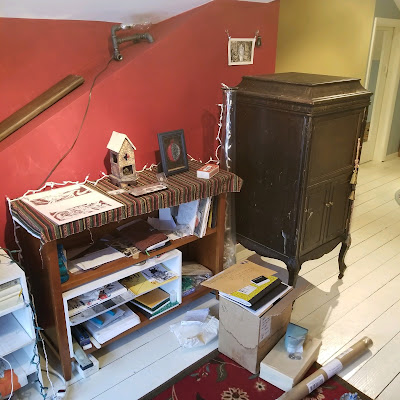 Now, on to the writing corner. Let's see there's another original piece of Doug Kovacs' art (from The Cthulhu Alphabet - you'll see the printed version in the book at 3:46 on the video I've linked), a sculpture one of my sons made, some medieval coins (yes, genuine), and an original piece from Valin Mattheis that I bought just a few months ago. The boxes are a box of old Analog magazines I need to read through (there's a writing notebook and a handwritten letter that Rikki Ducornet sent me years ago, when we were in correspondence), and a box of slides from my parents with a slide viewer atop that. Then a tube of handmade marbled bookend paper that I'm saving for a project. There's an edison lamp, another piece of original art on the wall (can't remember the artists name - something Jamaica, I think), a wooden kaleidoscope-lens thingy, and a four foot high glass vase/beaker filled with Christmas lights. Then there is my writing desk. My actual writing desk. 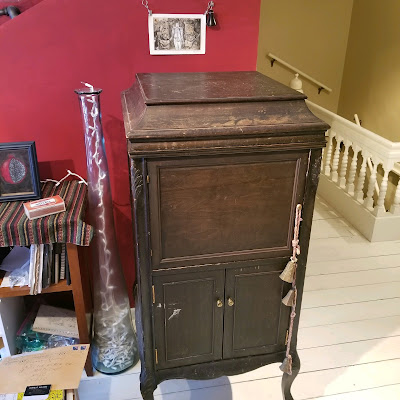 Yes it's an old gramophone case. Someone had put it out on a curb in Madison and I knocked and asked if it was really available. They said yes and I stuffed that puppy in my car ASAP!!! All the guts are missing. You can't play records on this. But the case is solid and complete. I have no idea why they put it out on the curb, but I'm not asking. This is the perfect standing desk for writing. And under the hood . . . 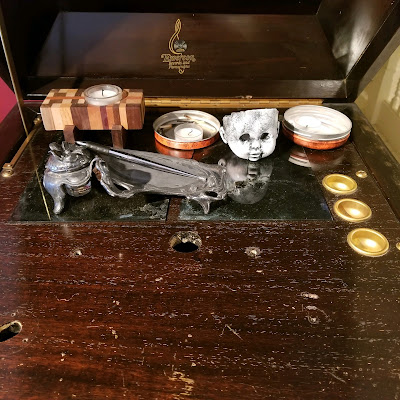 This is what faces me when I'm ready to write. Lots of candles, including a creepy baby doll candle holder (I need more of those), a cool wooden candle holder my wife bought for me, and a couple old Reuzel cans that make handy candle holders that reflect a lot of light. Then there's the inkewell/penholder of art nouveau design (I have no idea if it's actually from that era, but I wouldn't doubt it, given the style and craftsmanship). Oh, and there are a couple shards of antiqued/distressed mirror under that, as well. in the cabinet underneath are plenty of cheap composition books, some pens, some incense - you know, all the necessities of writing.
And there you have it: my new writing area. Now that I've gone on an on about it, I'm going to stop writing about writing and actually do some . . . writing!

Posted by Forrest Aguirre at 1:04 PM