I'm a writer, not an artist. I can draw humans along the lines of the Twilight Zone episode "Eye of the Beholder," but that's about as accurate as I get. One step better than stick figures, I suppose. Still, every once in a while I'll sketch something, usually to help me visualize something about the novel or short story I'm working on. I'm a kinesthetic and visual learner, so it helps me to use my hands and to see what it is I want to write about. It's a great way to work through writer's block (for me - your mileage may vary).

Every once in a very long while, though, I like to "blow the tubes" and undertake a "truly" artistic project. Because writing is my priority, I can't put as much time into such a project as one who makes his or her living with art. I'd starve if I had to make my living through art. But I think I'd starve emotionally if I didn't do something artistic now and then.

So I had this idea a couple of years ago and I'm actually making some headway on it. I have a great admiration for vinyl artists, those who take a "munny" and turn it into a little idol to the gods of cool pop-art. I won't even try to compete with that crowd. There are some seriously great artists doing spectacular things with vinyl toys that just leaves me in utter awe. I only wish I could afford to buy some! But I did have this idea that I think just *might* be original.

I've always loved tin wind-up robots. I have a relative (husband of a 2nd cousin once removed, if I remember correctly) who collected tin robots and other tin toys and gadgets well into his old age. Now, I'm not quite so enamored of them as he was, but there is a certain nostalgic tic that flickers up in me whenever I see a tin robot. As a kid in the '70s, I was always jealous of the kids who had those cool walking plastic robots that would shoot sparks out of barrels in their chests. I even had one for a while. Not sure what happened to it, but I'm guessing that mom tossed it out when we moved from Italy to Minnesota (she also gave away all my comic books to the thrift store that move - GRRR!!!). You can't even buy toys like that nowadays because . . . well, something to do with Homeland Security, I'm sure.

So here's my idea: remember the nose art that they used to put on WW II bombers? And remember the old lowbrow hot rod art of the 1950's - 1970's, flames and racing stripes and stuff? Well, what if you took that stuff and put it onto tin robots? Wouldn't that be cool?!?

Granted, I"m not really the guy to do it. But I'm going to give it a shot anyway. If anyone steals my idea, please send me some royalties, OK? I take payment in expensive Dark Chocolate (and, no, Lindt doesn't count - I want the *real* stuff)!

So here is my work in process. I bought this guy on Ebay, sanded him down (which was hours of work), came up with a scheme, and outlined the . . . well, the outline. Still have a lot of work to do on this, and I have no idea how it's going to turn out. Hopefully this will be better than that first time I tried painting Dungeons & Dragons figurines out as a kid. Those turned into something like the melting Nazis from Indiana Jones, or maybe Shmoo.

Here's to hoping that this guy turns out a little lot better! Front view first (sorry for the low-res): 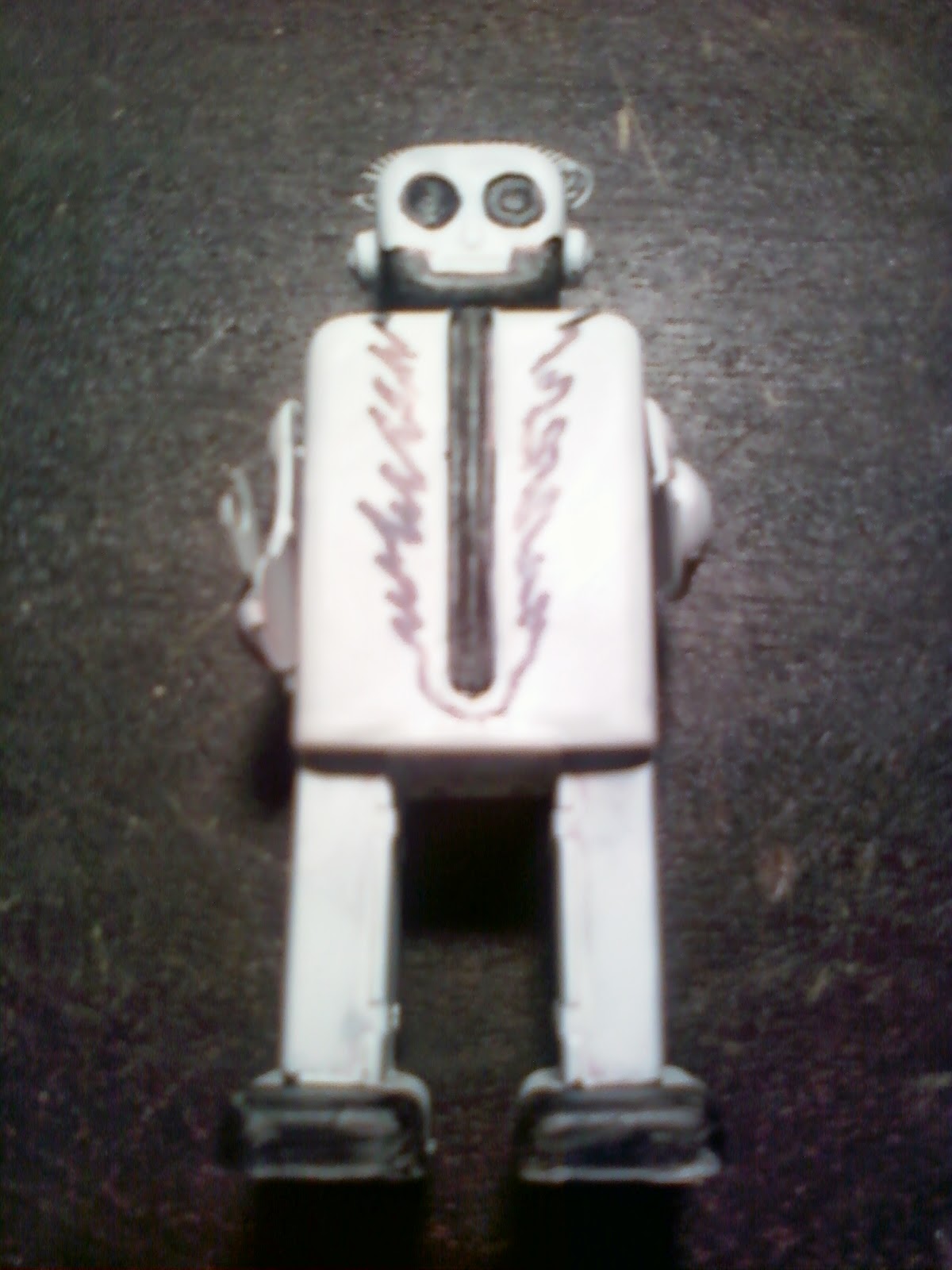 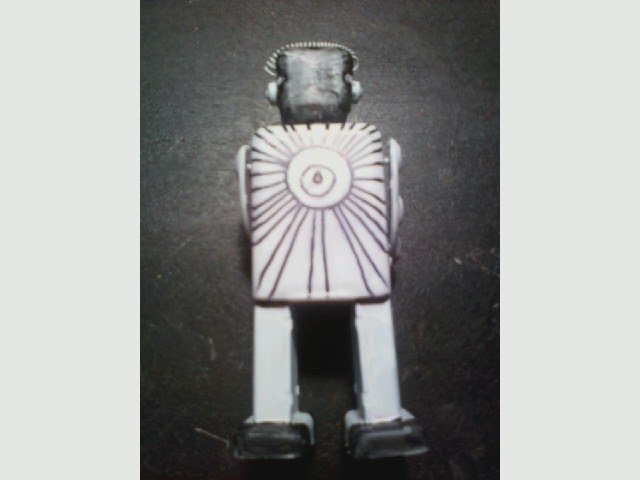 Needs some work, to say the least. But at least I'm getting started. If I can get it done up quickly enough, maybe I'll display it at Wiscon. If not this year, next, which might be a better option because then I could have a couple of them done up. We'll see. New creative adventures!
Posted by Forrest Aguirre at 7:31 PM