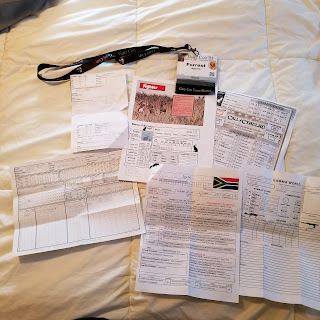 In lieu of a proper report from Garycon 2019 (which, frankly, I cannot do justice), I give you my Rogues Gallery, the characters that I played in my sessions at Garycon. Keep in mind that I also Judged a session of Dungeon Crawl Classics: Crawling Under a Broken Moon and that I was a Keeper for the Call of Cthulhu adventure, Gatsby and the Great Race. These characters are not in the order I played them or in any particular order, for that matter. This is just to give you a hint as to the awesomeness that one can have at a tabletop roleplaying convention. If you haven't had the opportunity to go, GO! I recommend Garycon and Gameholecon, though I've been to few others. I hear from those that go to a lot of cons that these are two of the best, so it's more than just my opinion you're getting here. I'm thinking that in 2020, I might try to hit a third con: Evercon, Con of the North, or Gencon (thought the mere thought of Gencon terrifies me). We shall see if time and life and money allow for a third, though. For the time being, I am quite content with Garycon and Gameholecon. Now, on to the Rogue's Gallery.

Buckingham and Herbert Kornfeld II (Dungeon Crawl Classics: Crawling Under a Broken Moon) - two zero levels that actually survived the mayhem of their funnel. Herbert actually became a formidable opponent once he had a SawBlade Slinger in his hands, much to the chagrin of several of the undead overseers of Chris Zank's adventure "Damn Tasty".

Egebe (Top Secret New World Order) - I played the original Top Secret as a kid "back in the day," as they say. This was my first experience with the new game and I was quite impressed. They use an exploding dice mechanic which makes things very high-octane, as you would expect a spy game to be. My character contributed in a few places, but most importantly in the high-speed chase where he used his (stolen) Bugatti Veyron to run the bad guy's Porsche off the Autobahn, killing said bad guy while providing some critical information for the cadre to complete their mission. I'll have to be careful not to try to replicate this when my wife and I visit Germany this summer!

Kyub (Gamma World 1st Edition) - Not a whole lot to say about Kyub, a Pure Strain Human who learned how to use a bolt action rifle to good effect in a "scout and destroy" mission upriver from a settlement of mutants who had been forced to offer some of their members as slaves to a group of PSH elitists up-river from them. Frankly, the side adventure of exploring an old crashed airplane was more fun than the "actual" adventure, but that's how it goes sometimes.

Arthur K. Bennet (Call of Cthulhu) - A manager of some washed-up mystics who lost their abilities to Harry Houdini. Bennet, along with his group, are invited to the reading of Houdini's last will and testament, a meeting that unlocks some unforeseen doors. "Do Spirits Return?" was an as-always outstanding production (and I mean production - these guys are over the top) by the You Too Can Cthulhu crew. I ALWAYS reserve a slot for a YTCC adventure at cons!

Cotswold (Bunnies and Burrows) - One of two party fighters. I had wanted to play Bunnies and Burrows for many years, having seen ads for the game back in Dragon Magazine a loooong time ago, but this was my first time at the table. I LOVED it! Think Watership Down, the RPG. The system is simple and fun, easy to learn, but rich. The adventure "Warren of the Black Rabbit" was somewhere between Watership Down and The Shadow Over Innsmouth - it was really dark, but fun and exciting that the 7 year old and 10 year old at our table had a great time, while us older players wallowed in the pseudo-eldritch tone of it all. I will definitely play this game again.

Bertram Codwoddel (Dawn Patrol) - Technically not an RPG, Dawn Patrol is another game I've wanted to play for many, many years and was thrilled to be at the table with a bunch of experienced players, as well as a few other noobs. I shot a German plane face on, which is bad etiquette, from my understanding, but it was necessary. It all ended in a draw.

All-in-all a great convention. And I had a blast DMing the games I did. While I have some serious misgivings about the way Garycon does their "featured" events, I'll be back next year, of course. And Gamehole is taking event submissions. Which reminds me - I need to get on that!!!
Posted by Forrest Aguirre at 4:36 PM