Regarding the Esoteric Denim, did I ever say I was finished? Well, did I?

I admit it. I was wrong. There was more to do. And there may be yet more. I guess it took me another social media fast (the one I'm undertaking right now) to carve out the time to sew on a couple more patches. As much as I hate sewing (and I really do hate sewing), I like the results.

First is this cool patch I picked up from Seventh Ink. I'm a fan of Folk Horror, and I thought nothing encapsulated the motif of folk horror like a sun with a skull shining inside of it. Think you're safe because it's a bright sunny day out? Think again: 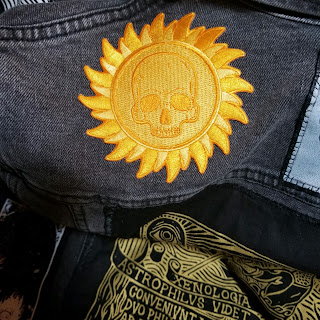 And, of course, what folk horror-themed accoutrement would be complete without Sister Moon? 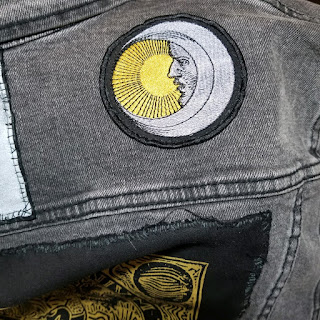 So, now, with the sun and moon flanking the mystic third-eye skull (well, one of them , at least), my shoulders are adorned thusly: 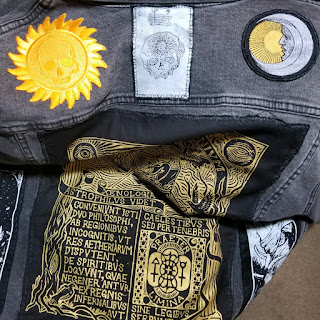 And . . . oh, hey! Lookee there! There's a sun emblazoned on that skull, too, right in the position of the third eye. I honestly didn't even realize that until I uploaded the picture just now. Seriously, that's weird. My subconscious has been doing costume design, apparently.

If I had to guess, I'd say there's more to come. At some point, though, I'm going to run out of room on this battle jacket and will need to get another. Maybe some day I'll learn to like sewing. On the other hand, nope.

In any case, it feels good to escape the clutches of social media and create something. I need so much more of that in my life. I'm so glad I've done this for a second time this year. This might become a much more regular occurrence. I'll let you know.

Posted by Forrest Aguirre at 7:45 PM