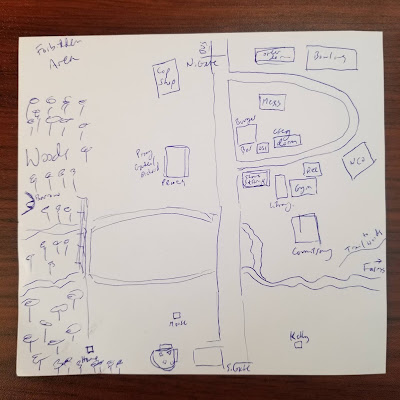 Here is my dream map of RAF Chicksands, as promised in my last post on Oneiric Adventures. I have tried very hard to parse out dreams from actual memories, as much a possible. Given that dreams are, immediately after the fact, memories, there is likely blurring of those lines. However, there are many elements of my memory that I explicitly did NOT include in this map because I couldn't recollect a "dream memory" of them.

I'm going to catalog the elements here starting in the bottom left hand corner, moving to the right, and then "up" a "line" and, again, left to right, and so forth. The main reason for this is because my home is in the lower left corner and, when I lived at Chicksands, I most often travelled north across the two branches of the River Flit, then east along the top branch, then on a diagonal up toward the bowling alley (in the extreme upper right corner) or I left home and travelled more-or-less on a diagonal toward the point where the lower branch of the Flit intersects the main road (which I've drawn incredibly large, as this road essentially bisected the base), where I would get on the main road, cross the river branches, and again head on a northeast diagonal toward the bowling alley. The features to note are:

3. The elementary school east of that.

4. The south gate of the base.

5. The home of Kelly, a girl whom I had fallen in love with and wronged, to my shame and regret.

6. (moving up) The woods to the west of my house and west of the base, beyond the barbed wire security fences that surrounded the base.

7. East to my friend's house. We called him "Moose" after the Archie and Jughead comics because, well, Moose was a big guy.

8. The lower branch of the River Flit. A bridge crossed over onto the area between the two river branches, known as "Sports Island".

10. East beyond the road, the confluence of the two river branches.

12. A trail to the woods to the east and north, beyond which were farms.

13. A barrow. Clearly only a dream figment. There is no barrow in those woods that I know of, but I dreamt of it with some very intense dreams on many occasions.

14. The upper branch of River Flit.

15. The Priory grounds and Chicksands Priory, which I was able to revisit in 2019. Strangely, it figures powerfully in my memory, but only faintly in my dreams, though I did dream about it a few times.

16. A conglomeration of buildings, probably the center of activity on the base for adults. This includes the Stars & Stripes Bookstore, the Library, the Gym, the Recreation Center. There was also a movie theater there, but I omitted it from my map because it never appeared in my dreams.

17. The NCO (Non-Commissioned Officers) club, where I spent a lot of time once I was of legal drinking age.

19. Another conglomeration of buildings on the other side of a road that curved up the hill toward the north of the base, including the Burger Bar, OSI (Office of Special Investigations) detachment office, the dorm in which I spent a fair amount of time (see the paragraph on psychogeographical context below), and the Mess Hall. Yes, the Air Force cooks the best food in the military.

20. (now in the upper left hand corner): what I will call the "Forbidden Area". It's where the intel work was done, where my dad and most people on the base worked. I was forbidden to go there, being only a dependent, but that never stopped me from dreaming my way there. Au contraire, I have all kinds of dreamtime images and experiences of that area, though I only saw it up close once or twice.

22. The north gate, where we would often catch the bus to Bedford.

23. Other dorms, which I never dreamed about going into, though I did dream about walking past them to get to . . .

24. . . . the bowling alley. You'd be surprised how much of a hub of activity a bowling alley is on a military base. It is one of the places to be, for sure, where all the cool kids hang out. Seriously.

Now, some psychogeographical context. When I left Chicksands, I did so under a legal banishment by the base authorities because of an arrest and trial on drug charges. At the time, one of my best friends was named Greg Boehler (at least I think that's how his name was spelled). He had nothing to do with my crime, but I'm pretty certain he was brought in for questioning because of the substantial amount of time we had spent together and because two of the three other people arrested in this case had close ties to Greg, as well. But again, he had nothing to do with any of my crimes. Nevertheless, because I was under investigation, my contact with anyone was restricted. I was essentially under house arrest until my trial (and for some time afterward before I was banished from the base). Nearly all of my dreams involve a search for Greg, with whom I had almost immediately lost contact (though I begged my Mom to get his address or phone number so I could keep contact - if he wanted to do so - she never got me the information) and whom I have been unable to locate, even after many searches through the years for information on his whereabouts. More than anything, I want to talk to Greg again and apologize for any pain I might have cause him through this whole thing. This desire echoes throughout my dreams again and again and again. It is one of the main driving forces behind my Oneiric wanderings.

In fact, almost all of my dreams are spent searching for someone or some place. Even if it's to encounter a random person any place, just to assert that I am something more than a mere ghost wandering in search of my past, alone in an abandoned place that isn't even whole any more.

My dreams here always carry a sense of loss. I think you can guess why. But not just a sense of personal loss of friends. There is a sense of spontaneous decay, of physical places disappearing. Or there is that dreamtime futility of trying to get somewhere and finding it impossible to do so, no matter how hard one tries, no matter how many different angles of approach one takes. These are the most frustrating of them all, I think, something like an alternate universe in which buildings are missing, buildings that I know are there, though I can't see them. Not that they are invisible, they are simply gone, vanished, though a lingering after-presence can be felt in the air that speaks to the feeling that there should be something there, that something belongs there, but it is not. It is this sense of loss that compels me to even write about the subject at hand. It is one of the most powerful yearnings in my life, to see those places and people again, if only briefly, if only long enough to become reconciled, remembered, and forgiven. Over thirty years after the fact of my living there, the place and the people haunt me.

Or, perhaps, I haunt them?

Posted by Forrest Aguirre at 11:38 AM