Call me a punk, if you must. I love Zines. I recall the days way before the internet was public, when it was only used by the military (my father confirmed to me once that he was using it, in a more primitive form, as far back as the early '80s), when Zines were a primary form, no THE primary form of communication amongst the punk underground. They'd spring up at record stores and sometimes at concerts, usually given away for free, though I'm sure some enterprising young capitalists (i.e., not punks or were they so not punk that they were punk?) sold some for cash. Or Dead Kennedy's patches. Or something.

The thing about Zines is that they were (and can still be) inherently subversive. From the Samizdat of the Soviet Union to the backstreet record store Zines of Omaha, Nebraska, there was also a subtext of "screw the establishment" in these little handmade, stapled books of cardboard and paper. Remember, this was before photoshop, so you literally had to cut and paste and copy real photos (or copies of such) by hand. This was production outside of the publishing industry, and intentionally so. Distribution was likely by some kid carrying a few copies in the inside pocket of a trenchcoat asking the record store if they could leave a few copies. Communication between fans was facilitated by either snail mail or phone numbers typed or written in the back. Again, this was meant to avoid the scrutiny of "the man".

If our imaginary distributor was anything like me, this kid hopped fences, walked through piss-drenched back alleys, crossed abandoned lots on the edge of town, and generally ambled where others would not go. This sort of walking the seams of society was not limited to urban settings. I took great delight in wandering those areas of suburbia and even on the edge of the country where no one wanted to be. Where the sprawl of capitalism smashed up against the wilds of the country, where weeds grew up between old asphalt and tin roofs caved in on crumbling cinderblock buildings covered in graffiti, where Bad Things happened.

It's a wonder that, in all my wanderings, I was not once mugged or murdered or worse. I had my fair share of confronting feral dogs (twice), stepping on rusty nails (took one right through my left foot, bloodying my bobos on the top), drinking water I shouldn't have (that hand-pump in Italy that had me hallucinating with a 108 degree fever - I will never forget those hallucinations . . . terrifying!), and generally just exploring these waysides where no one sane (or sanitary) went.

I love those places. I still do. I was on foot a lot more back then as I was too young to drive. But even now, if I make some time (and it has to be made, I don't just "have" the time anymore), I will take the circuitous route on foot to a destination, cutting through the abandoned parking lots and over the tracks (sometimes over the train's hitch itself) to get where I'm going. I prefer to live my life this way. I don't routinely trespass in places marked as private property. Notice that I use the word "routinely". Sometimes, I can hardly help myself.

Which brings us to this little Zine: Interzone: 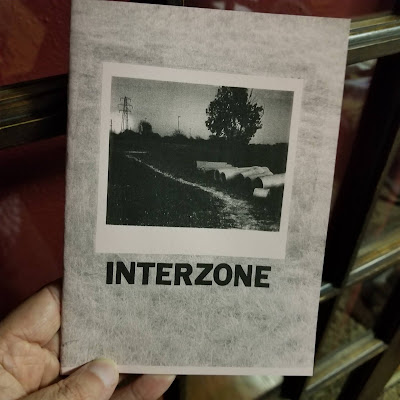 Yeah, you'll have to pay for it. But you're a grownup now, you can probably afford it. But besides the start up cost, this little beaut has an incredibly punk aesthetic and it's philosophically as punk as it gets. 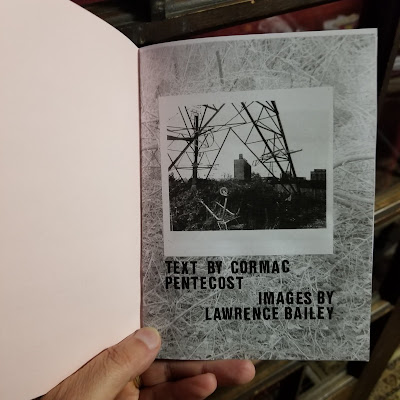 Was it all done on photocopiers? I doubt it. I mean, take advantage of technology if you can, says I. There's no shame in this. But it looks like it was done using the old cut and paste methods, replete with polaroid borders around the photos. Maybe it was all done with a polaroid and photostat, who's to know?

"What is this?" you're asking. It's an essay by Cormac Pentecost about what these areas between civilization and the wilds symbolize. I don't want to spoil it, but capitalism and its failures are at the center of the discussion, even as the places themselves are on the edges of throwaway society. Marion Shoard and Mark Fisher are quoted at length, which should be enough of a draw for those even mildly interested in hauntology and psychogeography. This essay straddles the tripartate line between history, philosophy, and activist politics. I am reminded of the later work of Michel Foucault, but with a decidedly less academic tone. In ways, it is a sort of elegy to times past, when such "edgelands" were more common, where late-stage capitalism hadn't quite subsumed everything in its path. But it's more than just a mawkish look backwards. Many of the insights hint at a ways forward, not just looking back at the loss, but providing a way through the loss via an examination of these edgelands and their features.

For those much younger than I (there are many more of you every day), if you want a glimpse into what life was like in the '70s and '80s for those of us who liked to adventure in these in-between spaces or if you're simply trying to get into why Generation X is the way it is, you might want to give this a spin.

For everyone, I think that Interzone is a great reminder that those liminal spaces can be appreciated for what they are, where they are, and what they symbolize. They can be a motivator to do your little thing to make society a little bit better . . . and a lot weirder. Weird on! 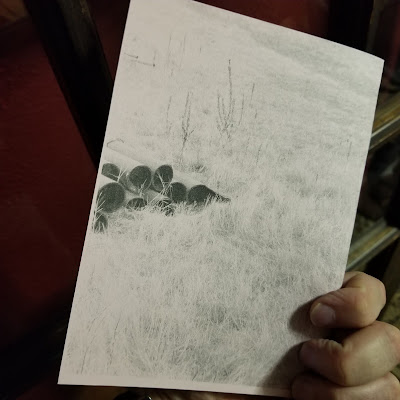 Posted by Forrest Aguirre at 5:45 PM