After our visit to the UK, which ended on a wonderful, exhausting day hike, we were off to Heathrow the next day to fly into Munich. After a very pleasant talk with the Munich police (no, really, they were super nice) we entered Germany and drove our rental car to an outlying hotel where we spent the night before heading to Vienna the next day.

And by "rental car," I mean the Mercedes that I splurged on. It was almost my 50th birthday, and . . . you know . . . the Autobahn!!! Now for some, a Mercedes is pretty run-of-the-mill, but not to this guy, whose fanciest car ever is the Camry sitting in my driveway.

I should note, also, that I was almost born on the Autobahn. My Dad had to drive my Mom from Frankfurt to Wiesbaden, where the hospital was, when she was in labor with me. There was a traffic jam and my Dad, being a brash American, decided to drive up the shoulder to bypass traffic. Mom was apparently about to pop! And, of course, he was pulled over by the Polizei. However, like a scene out of a bad movie, when the officer saw my mom's condition, he turned on his siren and led my Dad up the shoulder of the Autobahn all the way to the hospital. I waited until we were inside to make my entry into the world.

So, I had a sort of affinity to the Autobahn. I made sure to watch a LOT of youtube videos on Autobahn etiquette, because I was certain (and correct) that driving like an American there would land me in handcuffs explaining myself to some US diplomat.

I'll be honest: Germans (and Austrians) are some of the best drivers I've ever encountered. Granted, that's comparing them to drivers in Italy, the Philippines, and Utah (ugh, Utah drivers - UGH!!!!), but the combination of courtesy, a strict adherence to the rules of the road, and a certain confidence in their driving ability made driving the Autobahn a pure pleasure.

I'll anticipate your next question: How fast did you go? Well, I topped out at 225 KMH or so, or around 140 MPH. Yeah. That was good stuff. Would definitely do it again, in a heartbeat. Natalie got some really bad pics of me approaching that speed, but she was a little freaked out that she might bump my arm and make this our last drive ever, so she only got the following shot. To be honest, I was really worried about her bumping me, too. What is the quote from Mario Andretti? "If you're in total control of your car, you're not racing." Or something like that: 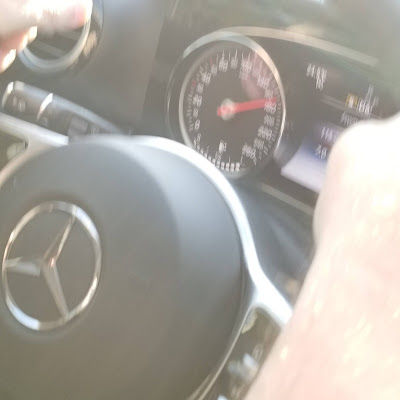 After checking in to our Air B-n-B (thank you, Vera, you were wonderful!) we got passes for the U-bahn and headed to Figlmüller, which is, from what I understand, fairly famous for its schnitzel. You can see the extensive "specials" menu in the background behind Natalie here. We chose . . . um, let's see . . . uh . . . oh, yeah . . . schnitzel! 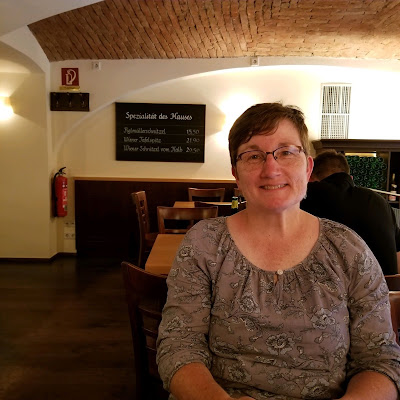 And, oh my, if you're in Vienna, make the time to get a meal here. Oh my, oh my, oh my. I ate mine like any good Wisconsinite would: 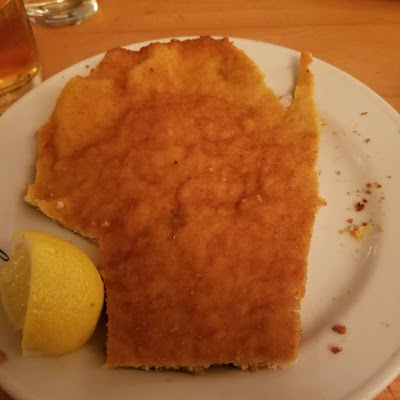 Okay, so Door County isn't exactly accurate here, but we had been in Europe for a week. I just forgot the correct proportions. Besides, I like abstract art.
There was also a potato salad that was to die for, but pictures of potato salad are so blasé, I will pass. The chocolate cake at the end, however . . . you know, I'm typing this while fasting. Sometimes I really hate myself: 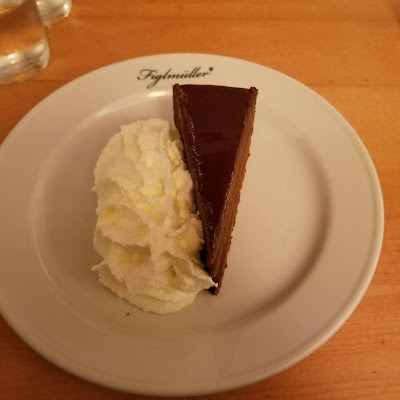 Then there was this apple-soda sort of thing that I absolutely fell in love with: Almdüdler. I had it a couple more times while we were over there. I need to find a US source for this. NEED . . . 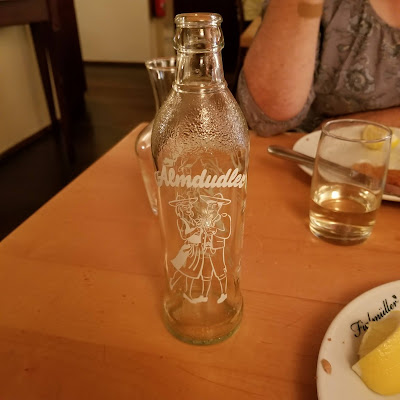 Why do all the best things in German-speaking countries have "ü" in them? I don't know.

After dinner (Tip: You'll DEFINITELY want to get reservations ahead of time!), we headed to Stephansdom to check out that beautiful cathedral. 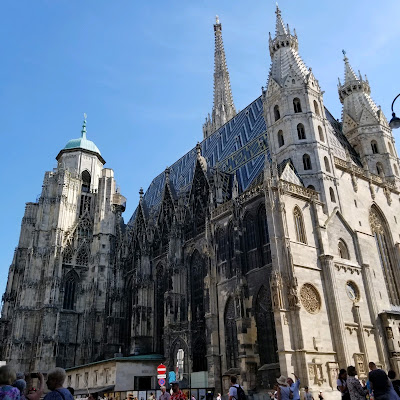 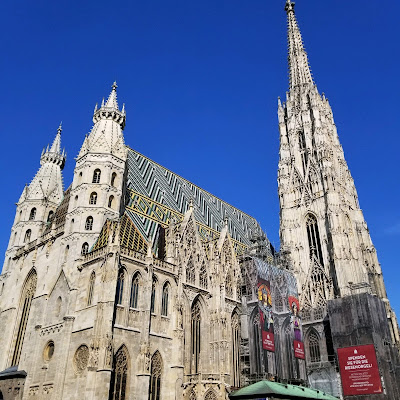 And, lest we forget: Gargoyles are everywhere in Vienna: 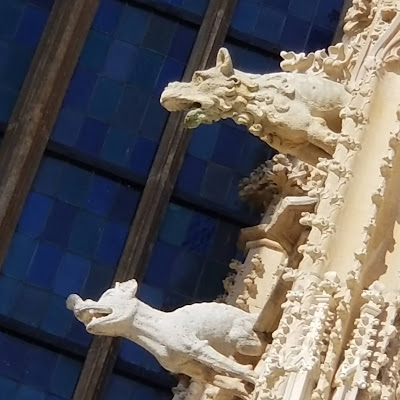 Yes, it is as gorgeous in person as in the pictures. No, actually, it's better!

One bit of advice: If you visit Vienna, LOOK UP!!! There is so much gorgeous architecture there, from gothic to art nouveau to modern and everything in-between. It's an architectural historian's dream. For example, there's this building (I never did get the ID on this one, as with many buildings there, since I was too busy gawking to worry about names), which is right on Stephansdom Platz. 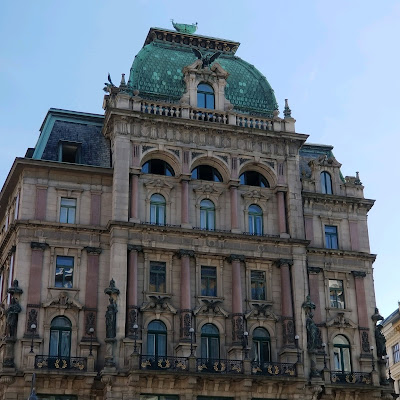 Or, there was this very cool modern building that faced Stephansdom. Note the thinned reflection of Stephansdom in the photo I took here. 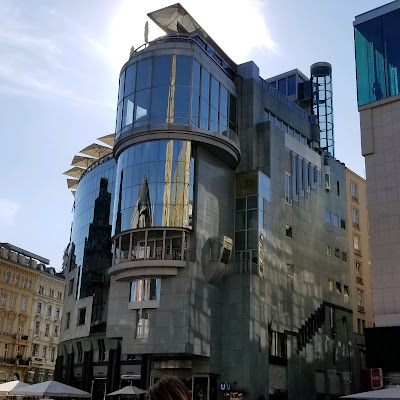 Also note that in that upper window area was a statue that looked down (probably with great condescension) on the Platz. I couldn't tell what the statue was, but I got the impression that some power broker of some type had his office in there: 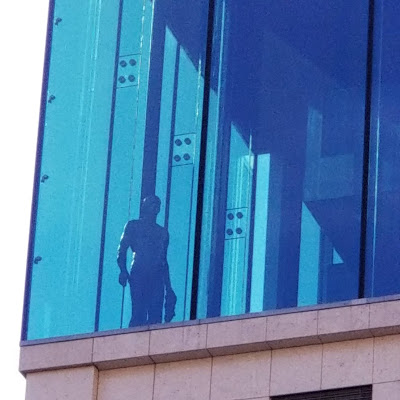 Most people just went about their business, completely ignorant of this inanimate onlooker. I had about a dozen story ideas flash through my brain when I saw this. I'll need to work on those.

And we saw this beautiful art-deco cornerpiece on our way to the Secession building: 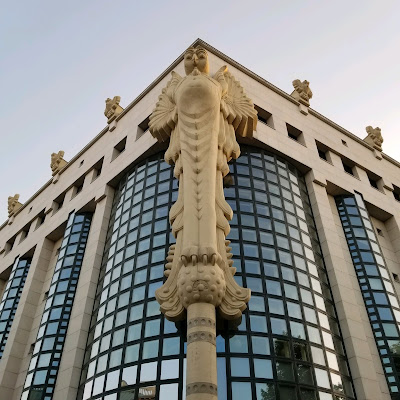 I had visions of Wim Wender's "Wings of Desire" here. No, it's not Berlin, but this style would have fit right into the movie. Or maybe "Blade Runner"?

On to the Vienna Secession building, which was absolutely stunning. Here, try pictures, not words: 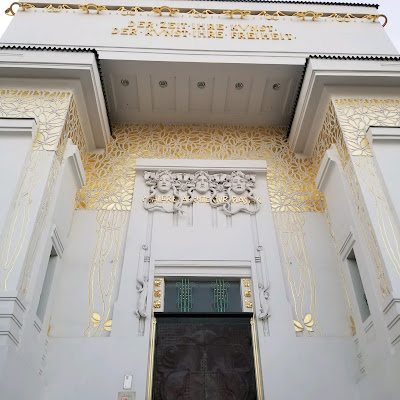 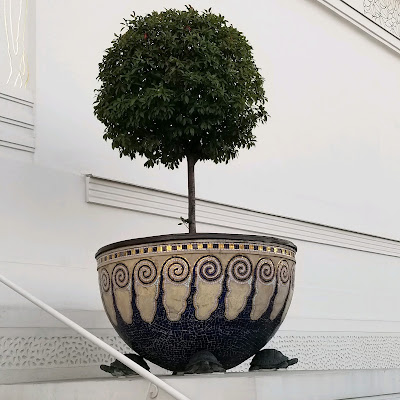 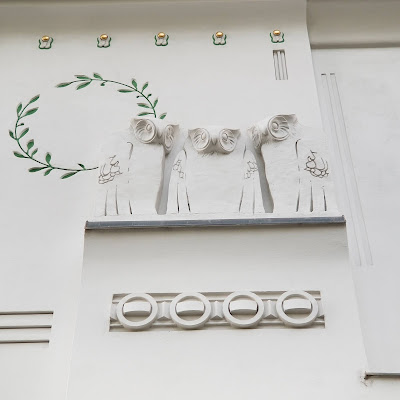 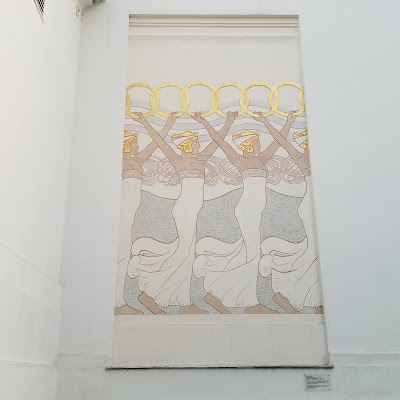 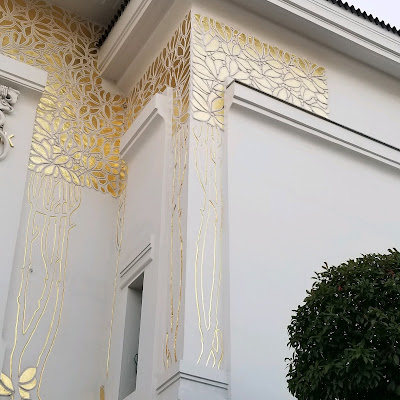 Again: more beautiful in person, but you get the idea. I'd say this was my favorite building that we saw on our entire Europe trip. I was absolutely gobsmacked.
After waking up from that architectural dream, we took the U-Bahn (the transportation system that makes Vienna one of the most "livable" cities I've visited) to Marien Theresa Platz. I'll skip the history lesson (you can look up Maria Theresa on the interwebs) and show our first impression of the old Empress: 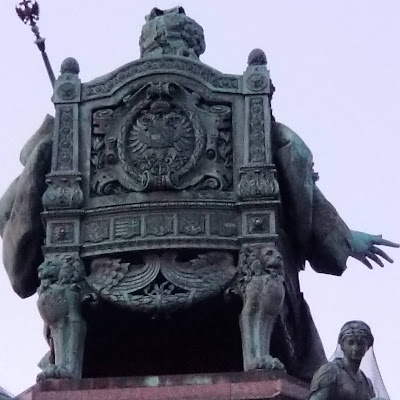 Yep, she had her back to us, the old snob. So we favored her by going around front: 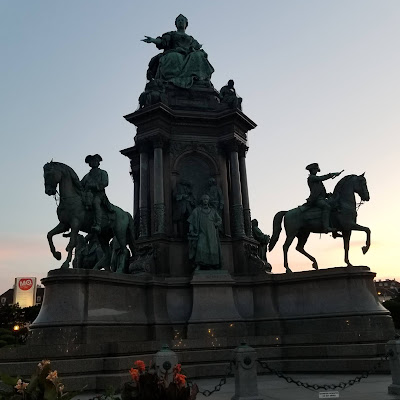 As you can see, night was falling, so we turned our backsides to her (turnabout's fair play, as they say) and headed for Hofburg Palace and the surrounding buildings. 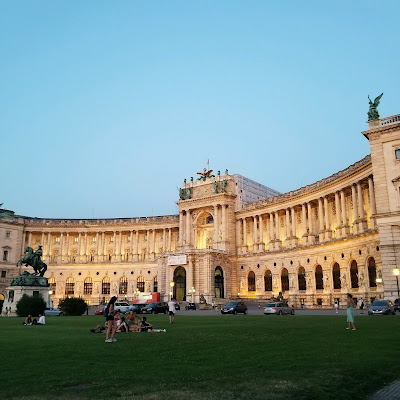 The palace was all nice and such, but I had really come to see . . . Orcs? 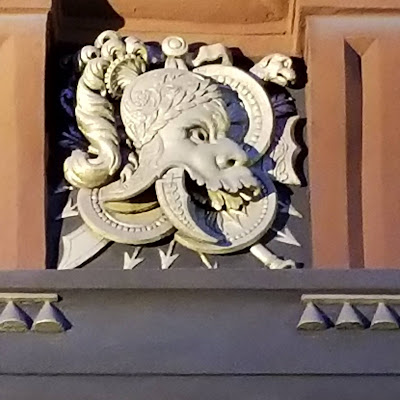 Isn't that some fine, fine Orcitechture? And don't try to tell me it's not an orc, it totally is, and you are wrong!
There was an interesting building that was obviously made for grand entrances and exits to the palace grounds that we quite liked: 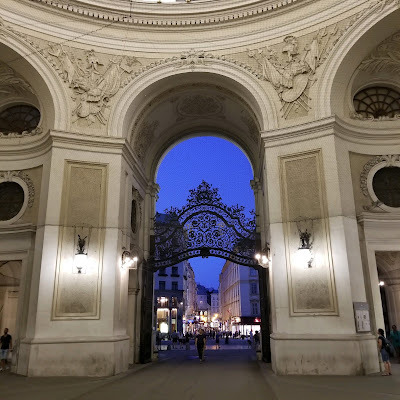 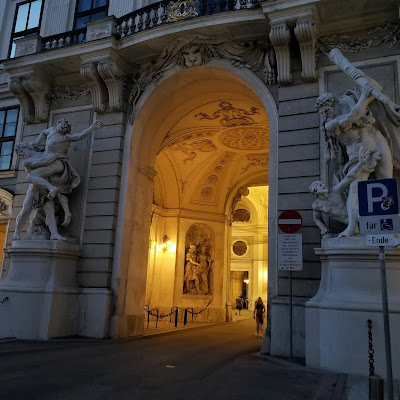 Hercules beats people up, absconds with women, you know, his typical schtick. What I love the most about this, though is this lion "hiding" atop the gate (#rollforinitiative): 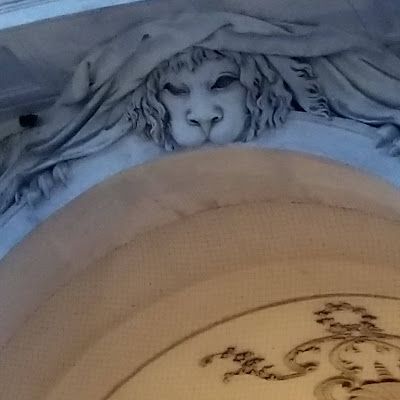 And these decked out battle maidens: 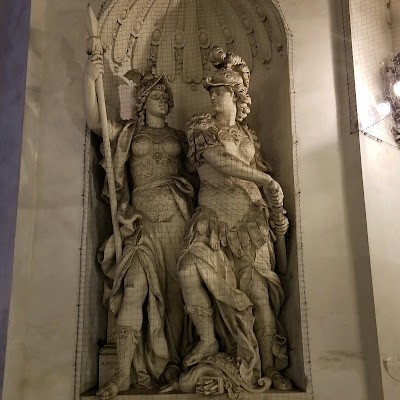 I would totally want these paladin-ladies (Paladiens?) in my adventuring party. They are ready to rumble!
Lastly, there was this super-cool piece of statuary of an aquatic nature, though I'm not sure which myth it represents. Anyone? Bueller?
When we approached this statue, some guy was taking a picture of someone who was either his sister or his girlfriend and she looked EXACTLY like the woman at the top of the statue. I mean EXACTLY (well, except for the clothing). I didn't get a picture of her, unfortunately. But somehow, even though I tried hard to protect people's privacy, I caught some girl who had weaseled her way in just as I was taking my shot. She most definitely did not look like the statue and was, I am hoping, cursed by the goddess of the statue to be . . . I don't know, infested by eels or sea urchins or something? 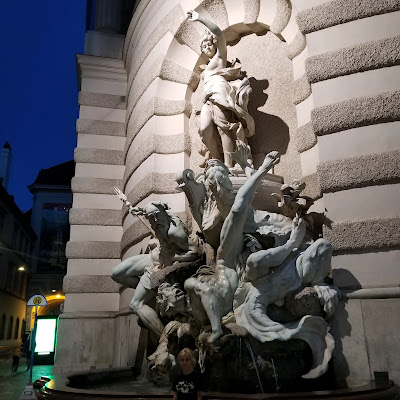 On the way back to our place, we did some window shopping. We spotted the following in a window and were sad that we didn't have hundreds of Euros to just blow on an outfit for our grandson that he'd outgrow in a few months. 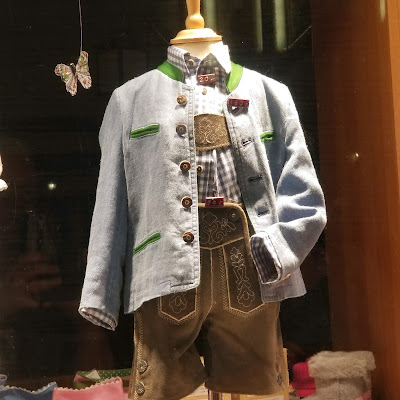 Is that not the kyooootest little boy outfit you've ever seen? Oh that I had money to throw around like that. *sigh*.
Then, of course, I spotted the following jacket in a window (the first of many such jackets I would lust after and not be able to justify buying): 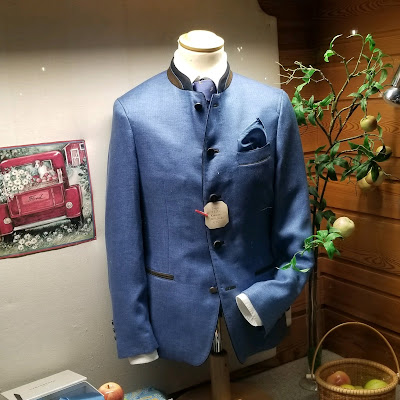 So, our sartorial ambitions crushed by financial reality, we went back to our Air BnB to rest up for the next day and our visit to the Kunsthistorisches Museum Wien.
Posted by Forrest Aguirre at 8:44 AM