Little, the Giant Robot, at the Islands of Purple-Haunted Putrescence

Today I had the putrescent privilege of being introduced to Venger Satanis's Islands of Purple-Haunted Putresence and to Venger's slick and quick Crimson Dragon Slayer system. I played a robot wizard and had a fantastic time of it, despite having to be shut down for a time after being zapped by . . . well, by some of these:

How does such a thing happen, you ask? Well, lots of things happen in this tongue-firmly-planted-in-cheek '80s-retro space fantasy role playing hexcrawl. Luckily, I was able to circumvent the blue screen of death and continue the adventure, displaying my "online" status on the Commodore 64 monitor retrofitted into my chest.

Now, I don't want to give too much away, since Venger will be doing a play report, but suffice it to say that there were lots of cavemen, cultists, imps, and a large caliber laser cannon along the way. There were exploding brains, a kill-happy dwarf who slaughtered heaps of people while tripping over his own beard, and a little peek into the best little whorehouse in space. In other words, heck yeah, we had a good time!

The system is stripped down to the bare essentials, quick to learn, but allows enough randomness to keep things anywhere from "interesting" to "absolutely gonzo".

The module is a little Lovecraft, a little Heavy Metal, with just a touch of '80s pop culture - well, a touch that nearly killed my character. Anyway, a great mix for me, a great adventure for my character.

Speaking of which, below are some shots of Little Plasma Bane (name randomly generated, incidentally), my robot alter-ego. You'll find that he's based heavily on this little guy who lives on the back of my denim jacket. Yeah, this session had me waxing nostalgic, I must admit. First thing I did afterward was to put Red Barchetta on the car stereo and blast it because . . . well, '80s kids will understand . . . 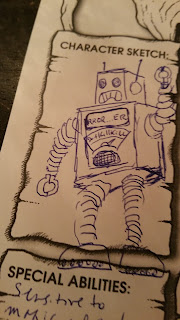 Little Plasma Bane, who is 8' tall 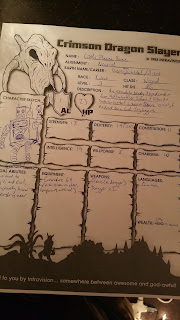 Robots use Intelligence, rather than Willpower, for spellcasting. Otherwise, Little would have been a poor wizard, indeed! 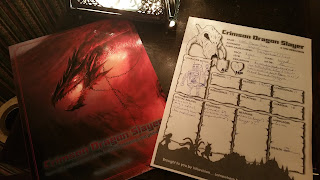 Thanks to Venger for a great time! One of my buddies who came hadn't gamed in 20 years, and another hadn't gamed ever. Hopefully, this is the first of many such games for Julius and Tony! I'll post a link to Venger's play report once it's up!
Posted by Forrest Aguirre at 5:55 PM