Reunited and it Feels so Good

No apologies for quoting that sappy '70s song in my title. I am reunited with an old, old friend - one from the '70s, in fact. Yes, my loving son bought me a copy of a treasure I had lost long ago, The Advanced Dungeons and Dragons Coloring Album. Now, while I have outlined my feelings about this book in the past, I offer this mini-photo-and-caption essay on my feelings as I opened this most welcome old friend back into my home: 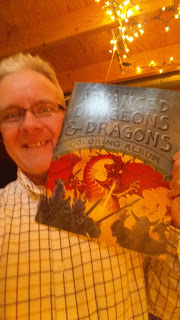 Such sinister lighting! Hey, I'm a gamer, not a photographer . . . anyway, yes, that is a gleeful face! I had a smile at least this large when I first discovered this at the B. Dalton's Bookseller at the mall in Saint Cloud, Minnesota, 1979. 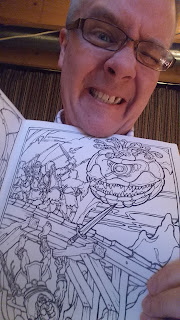 At first, the Beholder (TM) struck me as something amazing. I had never seen anything like it before. It blew my mind enough that I thought about filing my teeth down and removing one eye so that I could be as cool as a Beholder (TM), but then thought better of it. 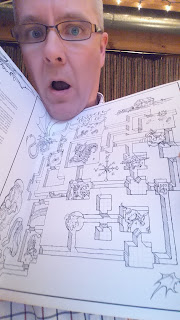 It's a good thing I kept that extra eye, or else I never would have beheld my first dungeon map. Yes, it's ridiculously overpowered, with e Remorhaz right down the hall from a Xorn and a Type IV Demon around the corner. The actual game system used for solo play here is more akin to OD&D than AD&D. It uses only d6, as in the earliest versions of D&D did (as I understand it). I was only to discover the joy of other polyhedrals later on. Incidentally, since I picked up a pack of DCC-compatible dice, I am rediscovering the joy and wonder of funky new dice. 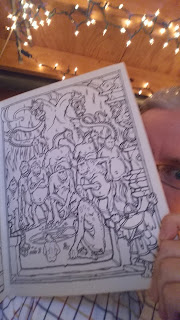 The game, as presented here, is somewhere in-between the old fantasy wargames and a truel roleplaying game. Really, it tends toward the wargaming side as a result of being a solo-dungeon. But in the ongoing story that is told in the book, there are some examples of the kind of epic adventure storytelling that can occur in a roleplaying context. Here, I surreptitiously peek around the corner with the dwarven warrior Trelli Gray-Sides as he looks through the Pearl of Foreseeing to witness a turn the party should not take! Thankfully, he heeds the warning, saving the party from certain doom. 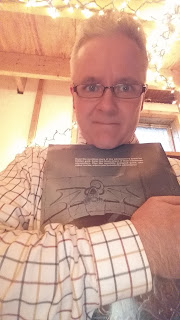 And there it is. Yes, the hair is grey now, but those are the eyes of a ten-year-old boy beaming with joy at having looked through this window into worlds of fantasy and adventure for the first time . . . all over again!
Posted by Forrest Aguirre at 3:03 PM