Take one part Flash Gordon and one part Space Riders, mix liberally with system-agnostic role-playing game accoutrements and package in a digest-sized comic book. This is Rayguns & Robuts by Planet X Games. 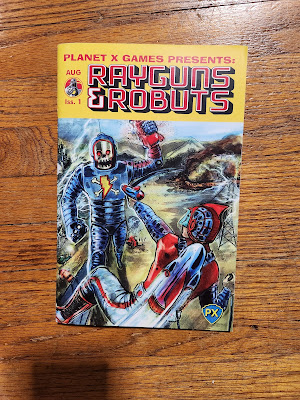 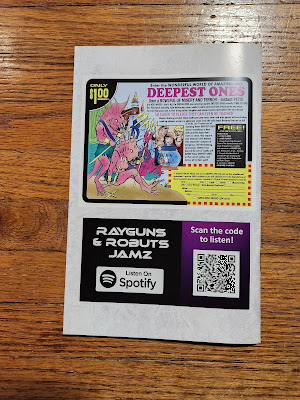 Look at that fantastic sea monkey spoof. This gives you a pretty good idea of the mood of the whole thing. It even comes with a soundtrack!

And what do you get for your hard-earned deneros? Well, here's the TOC: 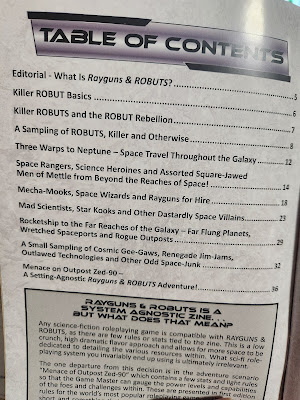 Yes, all that tasty goodness with a brief explanation of what "system agnostic" means. In short, no, you're not going to compromise your religious values by using this supplement (well, maybe you are, but there's no guarantee). What you will do is use the brains you've been gifted to slide the narrative pieces here into an existing game structure. Best to use this with a system with which you are familiar (I would suggest DCCRPG or The Simplest RPG System Out of This World, but you can use whatever you feel like. The offerings here are not tied to any particular system. There is almost no crunch here. You want crunch, you add crunch. You do you, man.

So, you might ask "is this a campaign world"? Well, yes and no. Mostly no. You'll find in here many heroes, antiheros, robuts, and worlds. The narrative descriptions act as signposts or "points of interest" in a potential campaign universe, but you fill in all the gaps. It's what we do with TTPRGs, right? Rayguns & Robuts is a starting point or, more properly, several starting points and waypoints. What's the end game? Up to you. Incidentally, I've been thinking that this could provide great material for a campaign that starts in the Ultraviolet Grasslands, then goes off-planet. If I were to do that, I'd be sorely tempted to use the Troika! RPG as my system.

Well, if it's not a full campaign world and doesn't have any rules, what does it do for me? What am I paying for anyway?

You are paying to have your mind BLOWN! I'm listening to some heavy psych metal while I'm typing this and, you know what? It's entirely appropriate. R&R is a mind-expanding supplement meant to crack the spaces between your synapses clean open and let psycho-pulp laser pistols, killer robots, cyborg chimps, and astro-zombies worm their way through into the depths of your brain. This is all about vision and mental expansion, it is, dare I say it, a prompt for your imagination to run wild. And all this without the use of mind-altering substances (or with, if you prefer - I won't judge). I don't want to spoil all the fun by telling you about every little detail to be found herein, just be aware that there is a depth to the ouvre of this work. A "voice" if you will, like a writerly voice, that is unique and memorable and, above all, playable.

You are also paying for some of the best eye candy I've seen in an RPG supplement. Artists Ed Bickford, Lawrence Hernandez, Je Shields, Dan Smith, and James V. West (who did some of the art for my own Beyond the Silver Scream) provide a shockingly-effective visual treat that is eclectic, yet "of a piece". Think of the movie Heavy Metal (one of my favorites of all time), where several different artists come together to form a complimentary work of art that is greater than the sum of its p(art)s.

There is an adventure in the back, which should provide a good starting point (or later waypoint, if you like) for a potential campaign. Now, I am partial to adventures with environmental hazards, but I realize that not everyone likes these. But if you do, you're in for a treat. Sure, there are a couple of monsters, but player characters are much more likely to accidentally bump themselves off than to be killed off by sentient (or at least semi-sentient) nasties. Not saying they won't be killed off by those nasties, but they are more likely to succumb to environmental hazards.

Don't you succumb to the hazards. Go buy this thing, already! Strongly recommended for acid-tripping psychonauts out to defeat killer machines - or those who want to be. Grab that raygun and GO!

If you like my writing and want to help out, ko-fi me at https://ko-fi.com/forrestaguirre. Every little bit is seen and appreciated! Thank you!

Posted by Forrest Aguirre at 7:55 PM