Back in early November, I announced (har, as if anyone listened!) that I would be taking a social media fast for the month. No Facebook, Twitter, or Instagram. Now it's December and what have I learned?

1.  I want more. Meaning: I want less. For the next several months, I'll be taking a two weeks on, two weeks off policy when it comes to social media. I would do an every other week fast, but it takes me a week to detoxify/decompress/get in the groove of not being on social media. So, that will be my modus operandi for a few months.

2.  I'm way more productive when I'm off social media. I keep a bullet journal, of sorts. Here's what last month looked like: 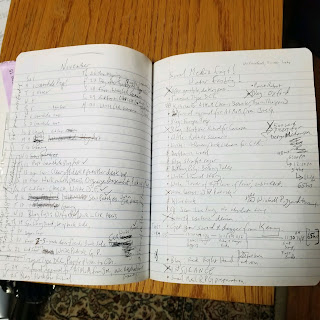 The important things are those big X's. That's where I accomplished something I had been meaning to do. Some of those items have been in my bullet journal for a long, long time. For instance, writing the Blackstar Ritual for Carcosa blogpost has been in there since November, 2017. You'll see "finish esoteric denim" there as well. Okay, it's not completely finished, but it is most of the way. Getting there only took a year. I first put that in my bullet journal in December, 2019. Blogging about Oxford? I'd been wanting to do that since August, 2019. There are some shorter-term things I got done, too, but you get the idea. It feels absolutely fantastic to get some of these things done, and it feels even better to be submerged in the process of doing them, giving them the time they deserve and giving me the breathing room I deserve. I feel more accomplished and mentally healthier!

3. I feel more socially-focused, not socially-scattered. I wrote a few letters to friends. Yes, snail mail letters - the original social media! And I plan on writing more. If you're interested in pen-pal-ery, make a comment and I'll fit you in where I can. Going back to Twitter tonight, I noticed there were some people whose feeds I was genuinely excited to read. But I also noticed that there are a lot of people who I want to know better, and some who I really (harsh reality) don't miss at all. Not that I dislike them, by any means, but I feel like I want to focus my time on those who I find the *most* interesting, the *most* engaging, people whom I know I "feed" and who "feed" me in many different ways. There are a few accounts that I follow that will never follow me - that's cool, I'm allowed to have "idols," right? But I don't want most of my time spent on goo-gooing over celebrities I will never meet and who don't do more than merely entertain me. Life is about more than entertainment, though I, like any other human, like my share. I feel more like "me" when I'm interacting and not just gawking. What I really need to do (and might never because it's a lot like real work) is divide those whom I follow on twitter into separate lists and check them on a regular, rotating basis. Organizing my social media usage could be extremely helpful in preventing me from spiraling off into the never-never land of the interwebs.

4. I like blogs. So, kill me. I prefer longform blogs to social media, for the most part. I'm old-fashioned and, frankly, I miss the wild west days of the internet when search engines kinda sucked and there was some crazy stuff out there to discover. Reading blogs gives me that feeling more than social media does. Maybe it's something about the curatorial aspect of blogs that I like more than the spin and scan and skip of social media platforms. Blogs let people's personality shine through more than social media does, by and large, if the blog writer is thoughtful and gives her thoughts room to breathe. I wish all the people who I find the most interesting on social media kept a regularly-maintained blog. I know, I might as well wish for a cure for cancer and to discover the philosopher's stone, but a man can dream.

5.  I have to deal with boredom like I was a kid again. I was in college when the interwebs truly came on line (pun intended). When I was younger, I had to provide my own entertainment. That took many forms, but some of my favorite ways to kill time were to read, work out, and play RPGs. Granted, the coronapocalypse has made this more complicated, but I've found the way and have the time, when not on so much social media, to really dive in. And, of course, I love to write. Not being on social media affords me more time to write both fiction and roleplaying material, and maybe even a blog post or two.

6. This might sound weird, but I've been more keyed in on music. I remember the wonder of discovering new music as a kid and the sonic bliss I felt at times just putting on headphones and drowning myself in music. I listen to music all the time, now - that's one of the cool things about the internet - but it's often only as backgroudn filler while I'm surfing social media. I find it much more rewarding, however, to listen *deeply* to something with nothing but liner notes in front of my eyes. As a result of my social media fast, I'm redisovering the bone-deep joy of new music!

On a peripheral note, I also physically fasted much in the past month. My longest stint was 62 hours of fasting, with three other stints of 37 hours, 38 hours, and 38 hours. Did I lose all the weight I wanted to? No. But man, do I feel healthier. Which is a good thing, given that I'm now sitting here waiting on my Coronavirus test to come back. Yep, I'm pretty sure I got it, since two of my adult sons have tested positive and we spent a lot of time in close contact when they were contagious. I'm feeling a little icky, but nothing terrible yet. Maybe I'm bad at causation, but I find it interesting that I fasted as long as I did, recycling a lot of old, bad cells in the process (autophagy begins about 24 hours into fasting) and, if I am positive, I've had a pretty easy go of it so far. Famous last words, huh? Besides that, though, I have dropped some body fat and built muscle while doing it. I feel and look a lot "tighter," even though my weight hasn't dropped much. I'll probably continue to do this twice a month. If nothing else, it's good to purge old cells and create new ones. And I must admit there is a sort of physical high that happens when you break your fast (slowly, with soup at first). It's exhilarating (but can make you feel "blech" if you eat too much too fast, which happened a few hours after my initial long fast). There's also something to the feeling of self-discipline associated with it, as well. Maybe I have long lost Spartan ancestry I don't know about. In any case: Recommended (after consulting with your doctor).

Alright, gotta keep my bullet journal from filling up with un-done items again. So much analog life to live!

Posted by Forrest Aguirre at 6:52 PM